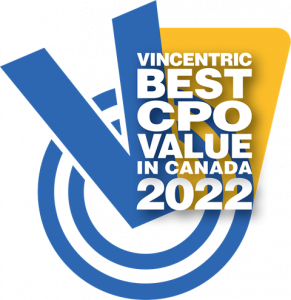 Vincentric’s fifth annual awards recognize the best-in-class vehicles in each segment to provide guidance to the Canadian CPO market.

BINGHAM FARMS, MICHIGAN, UNITED STATES, Oct. 4, 2022 /EINPresswire.com/ — The fifth annual Vincentric Best Certified Pre-Owned (CPO) Value in Canada™ Awards were announced today, with Toyota and Hyundai taking the top spots on the podium. Each brand received four model-level awards and one brand award. Toyota demonstrated its strength in the passenger car category, while Hyundai’s brand award was presented in the SUV & Van category. Audi followed closely behind with three winners at model level and the brand award in the “Luxury Cars” category. Rounding out the brand winners for this year were Lincoln with the luxury SUV brand award and Jeep with the truck brand award.

Toyota’s success was led by the Corolla with its second win for the compact hatchback. The Prius C, Corolla Hybrid and Avalon all earned Canada’s Best CPO Score for the first time, paving the way for Toyota’s Car Brand Award. Hyundai’s front-runner was the Kona EV with its second straight win in the EV/PHEV SUV segment, helped by first-time wins for Venue, Palisade and Ioniq Electric.

The Audi A7 took its second win for Luxury Large Sedan, winning alongside the RS 5 for Best Value Luxury Mid-Size Sedan and the e-tron for Best Value Luxury Electric/Plug-In Hybrid SUV. The Lincoln Nautilus and Jeep Gladiator were the star performers leading to their respective brand-level awards.

Other notable winners included the Ford F-350 S/D with its fourth win as a full-size 1-ton pickup, the Volvo V60 with its third win as a luxury wagon and the Dodge Grand Caravan with its second win as a minivan.

“More than half of the vehicles that received the 2022 Vincentric Best CPO Value in Canada award were first-time winners in their segments this year,” said David Wurster, President of Vincentric. “Having so many new entrants among this year’s winners demonstrates that consumers searching for a CPO vehicle in the marketplace have many new options for vehicles that offer best-in-class value. Our awards can help narrow down those options and give buyers a starting point.”

To determine the 2022 Vincentric Best CPO Value in Canada™ Award winners, Vincentric performed statistical analysis to show which vehicles had lower than expected operating costs given their market segment and price. Vincentric analyzed approximately 14,000 vehicle configurations across eight cost drivers: depreciation, fees and taxes, financing, fuel, insurance, maintenance, opportunity cost and repairs. The cost was measured after incorporating the specific CPO warranty offered by the manufacturer, while also applying the mileage requirements required to qualify as an OEM CPO vehicle. Each CPO vehicle was evaluated in all ten provinces plus the Northwest Territories, assuming each vehicle is driven 20,000 kilometers annually for five years.

You have just read:


EIN Presswire’s priority is source transparency. We don’t allow opaque customers, and our editors try to carefully weed out false and misleading content. If you, the user, see something that we’ve overlooked, please let us know. Your help is welcome. EIN Presswire, Everybody’s Internet News Presswire™, attempts to define some of the boundaries of what is reasonable in today’s world. For more information, see our editorial guidelines.

The Strategic And Societal Reality Of Digitizing Business

Wrapping up January: What’s new in the world of pigs?

The social VR community was shocked and devastated to learn that AltspaceVR was closing its doors. While it’s in the nature of emerging tech apps to come and go, many…