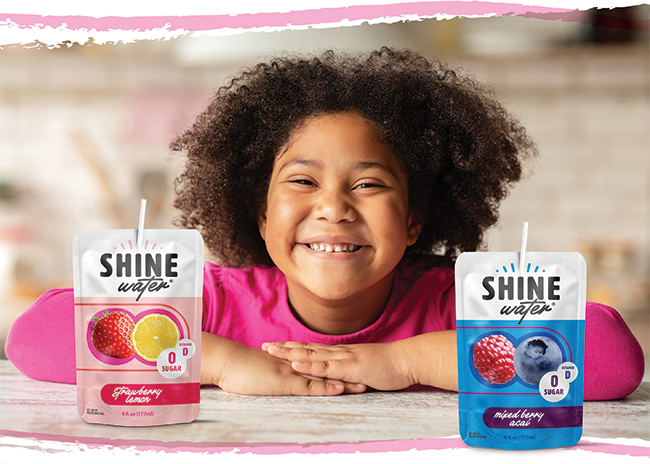 Beverage makers are starting to use these insights to create a different type of drink, aimed at kids, to compete with the juice boxes and high-sugar beverage pouches that have long dominated the market.

In the past, the kids’ drink segment was dominated by high-sugar fruit juices that used bright colors or cartoon characters to encourage little hands to grab them off the shelves. But just like their parents, children are increasingly aware of what they put in their bodies and mimic adults in choosing their own refreshments.

While older beverage brands like Coca-Cola’s Capri Sun or Hi-C still dominate grocery store juice shelves, new entrants and more established beverage companies are seeing an opportunity in this segment. They are reformulating existing products, using new packaging and playing with consumer trends such as sugar-free and functional ingredients.

Larger beverage companies are taking notice of the shifting sands in the kids category and are strengthening their positions accordingly. Honest Kids with no added sugar has been kept alive by Coke despite the discontinuation of parent brand Honest Tea, signaling the beverage giant’s trust in the kids’ juice brand.

Harvest Hill Beverage Company got into organic juice in 2018 by launching Juicy Juice Splashers, which didn’t offer high fructose corn syrup. In July, Kraft Heinz upped the ante by announcing it would reformulate Capri Sun juice pouches to reduce about 40% of the sugar content by using monk fruit as a sweetener.

The trend towards sugar-free sweeteners is increasing. According to SPINS Product Intelligence data, beverage brands with a “child claim” or position and a natural low-calorie sweetener have seen approximately 50% growth over the past 52 weeks across both conventional and natural retail channels.

SPINS found that stevia is one of the fastest growing sweeteners in this category.

Uncle Matt’s Organic has been using stevia leaves (particularly Reb M Stevia) as a sugar substitute in many of its products for some time. After receiving many requests from customers, it “made perfect sense to be part of the lunchbox,” said founder and CEO Matt McLean, so the brand packaged the lemonade and strawberry lemonade in 6.75 ounces. boxing

“The juice box is a sleepy segment. It’s just ripe for innovation,” he continued.

This potential is easy to imagine when the company didn’t have to change much to create the new kid-centric beverages. Uncle Matt’s already made a no-sugar-added lemonade with stevia. The only difference between juice boxes and the standard 52 oz. chilled sodas were the aseptic containers. That, and the juice boxes are boosted with immunity
strengthening ingredients such as zinc, vitamin D and vitamin C from the acerola plant.

McLean said the benefit of built-in brand recognition is that Uncle Matt’s also has easier access to its distribution network. So far, the juice boxes will be sold in Fresh Market, Wegmans and Fresh Thyme Markets and will be rolled out nationwide in Whole Foods and Sprouts in September.

“For 23 years, customers have already known us as a premium, premium, and leading organic juice company, so there is an obvious opportunity,” he said. “That’s kind of the beauty of it. We don’t really have to change anything. This is us.”

SPINS has shelf stable juices with a child positioning that grows 80% in the conventional channel and 13% in the natural channel annually. Uncle Matt’s isn’t the only brand finding plenty of white space to work with. Especially when it’s enough to repackage an existing product into a kid-friendly format to open up new possibilities for a beverage brand.

The brand was created by FDA doctor Dr. Phillip Davis as great-tasting, nutrient-dense water that provides a healthy dose of vitamin D. The vitamin is naturally synthesized in the body through sun exposure, but approximately 42% of the US population is vitamin D deficient; That number increases by over 80% among children, people of color and the elderly, said CMO Ryan Coon.

“You have young children, they go outside and you put sunscreen on, which you should do because that prevents a lot of other problems,” he said. “But that completely blocks the absorption of vitamin D. And that’s why young children have such a high propensity for vitamin D deficiency.”

ShineWater launched the bags in April after eight months of research and development. The functional water purifier realized it was an opportune time to enter the segment, as many large retailers had been reporting supply shortages since the pandemic began.

READ:  Can bedding for cattle solve the paddy stubble problem in Punjab?

“That was our ‘a-ha moment’ because we knew kids loved it,” Coon said. “There are many brands in the nutrient-rich water, but nothing in the children’s section. It’s either a watered down version of a fruit juice or just a flavored product or maybe some vitamin C in it but not really beyond that.”

So far, “orders are coming in fast and furious,” Coon continued, and initial reports from Walmart, where the brand began distribution in August, have been positive.

The decision in favor of bags was not made directly for Capri Sun, but for packaging with as little waste as possible. Portability matters, too, and internal research from the company found that kids not only preferred pouches, but offered ShineWater a new opportunity in stores.

“The top pair dogs have done a great job and they monopolize 90% of that shelf space. And if they had a hiccup in their supply chain, the whole system would collapse,” Coon said. What we are now hearing more and more often from buyers is that they no longer want to rely on that trust. This is a big risk for them. They want to diversify their sets more and we are more than ready for that.”

The decision to expand ShineWater into the children’s section was also based on the idea that children can and want to consume what they want
Watch adults eat and drink.

“You don’t have to have a product specialized for children. Children can consume adult foods. They’re not just these little chicken nugget/chocolate milk monsters,” Coon joked.

That applies across the board. More and more brands are seeing that, with the obvious exception of alcohol or cannabis, kids are looking for brands that mimic what they see in the hands of their adult counterparts.

Other brands have built on this idea. Tickle Water launched its sparkling water in 2016, aimed at parents looking for a fun alternative to sugary kids drinks. In 2018, RETHINK Brands launched a boxed water specially flavored for kids to complement its boxed water portfolio. It later expanded into a line of Juice Splash sweetened with monk fruit, which contained one gram of natural sugar. 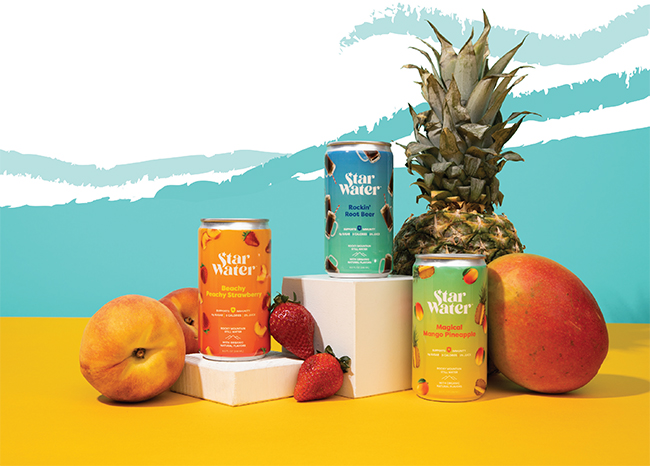 It was this belief in making kid-specific versions of adult beverages that led Liz Seeyle and Erin Fasano to start The Starryside Company and launch their first product: Star Water. The monk fruit-sweetened flavored water is fortified with vitamins C, D and zinc and contains zero calories and zero sugar. The first edition of Star Water is available in three flavors: Rockin’ Root Beer, Beachy Peachy Strawberry and Magical Mango Pineapple.

The brand caters to families who have left the more traditional kid juice department because there aren’t enough low-sugar, functional drinking options for kids. Early on, packaging became a big part of Star Water’s development. When Seeyle and Fasano started testing juice boxes with their kids at birthday parties and the kids complained that the boxes weren’t recyclable, the two founders knew Star Water would be packaged in 6-ounce aluminum cans.

“The key was putting them in little cans for little hands,” Seeyle said.

Seeyle founded a brand consulting firm, Starry-Eyed Strategy, to capitalize on her experience in the CPG industry. She uses her institutional knowledge to pitch Star Water not only as an immune-boosting, flavored water for kids, but as a way to empower kids to be more creative. She sees a clear connection between nutrition and imagination and builds the brand around this idea.

“We come up with drinks and snacks to make sure the kids’ creativity lasts,” she said. “Then it depends on how we compare to what’s on the shelves now. How do we break it down by packaging, calorie content, ingredients and prove it’s a better option?”

Currently, the brand is mainly sold D2C but is in talks with major retailers to break into brick-and-mortar retail. Seeyle hopes that using a sustainability aspect will help get Star Water onto the shelves of retailers like Kroger, which has its Zero Hero recycling program.

Beverage brands are realizing that it’s not just the ingredient list and price that compels parents to try something new for their kids’ school lunches. Brands need to offer a total package when entering the children’s beverage market for conscious consumers looking for something familiar but innovative.

Most importantly, it’s something those little hands love to grab.

An Icebreaker for the Business Club – News

Cleveland Guardians end regular season with 9-2 win over KC; on to the postseason

Chef Nischan Feted By Table To Table At Annual Gala