The study and results

In the present study, researchers evaluated the immune responses of SARS-CoV-2 infection-naïve healthy, vaccinated adults. Participants completed the primary series of vaccinations with Pfizer’s BNT162b2 vaccine or Moderna’s mRNA-1273 vaccine. They were boosted with a single dose of mRNA-1273 or the bivalent mRNA-1273.213 (based on the beta and delta variant spike proteins). Forty-six people were recruited; seven were boosted with mRNA-1273 while 31 received the variant-specific vaccine.

Enzyme-linked immunosorbent spot (ELISpot) assay was used to quantify circulating spike-specific plasmablasts. The authors discovered spike-specific IgA and IgG-producing plasmablasts in all mRNA-1273 recipients one week after the boost. Similarly, they observed IgG-producing plasmablasts against the spike protein of progenitor strains, beta and delta variants. In addition, fine needle aspirates (FNAs) and bone marrow aspirates were collected from some subjects after boosting.

FNA samples were stained with fluorescently labeled spike protein probes from ancestral strains, beta, delta, and omicron (BA.1) variants. Spike-binding GC-B lymphocytes and follicular helper T cells were detected in all FNA samples from all participants at two weeks. Spike-specific memory B cells (MBCs) were present in all participants before the booster, and were maintained at a similar frequency after the booster.

Three participants from mRNA-1273 and mRNA-1273.213 cohorts were selected to characterize the MBC repertoire. Clonally different antigen-specific monoclonal antibodies (mAbs) were generated from six participants and tested for spike binding using a multiplex bead binding assay. The authors found that 94% and 92% of MBC-derived mAbs from mRNA-1273 and mRNA-1273.213 cohorts recognized spikes from ancestral strains, beta, delta and BA.1 variants.

Single cell RNA sequencing was performed on plasmablast and FNA samples from these six individuals. Most spike-specific plasmablasts identified after the booster vaccination were clonally related to GC-B cells, MBCs and plasma cells elicited by the primary vaccination. After administration of the second dose and the booster dose, there were several spike-specific plasmablast clones. Representatives of these clones in booster responses showed significantly higher frequencies of somatic hypermutation (SHM).

Spike-specific plasmablast clones were identified in GC responses in all six individuals. SHMs in spike-specific MBCs were significantly higher after the booster than after the primary series. Although both booster vaccines induced a robust GC response and MBC maturation, variant-specific antibodies (against beta and delta spikes) were not isolated, suggesting that the first vaccination series shaped the B cell response.

Also Read :  How to Diagnose and Manage Alopecia Areata

In addition, eight people were recruited to assess whether an antigenically more divergent vaccine booster could induce immune responses against novel epitopes. These double-vaccinated subjects received the mRNA-1273.529 vaccine (booster) encoding the BA.1 spike. MBCs were sorted from participants’ peripheral blood samples 17 weeks after the booster. Almost all mAbs (99%) were cross-reactive and bound to spikes from ancestral strains, beta, delta and BA.1 variants.

Next, the neutralizing capacity of the mAbs from the three cohorts was examined in a high-throughput assay. Researchers discovered 131 mAbs that neutralized infection by at least 80%; These mAbs were tested for neutralization against a panel of authentic SARS-CoV-2 particles. Most mAbs inhibited infection by 90% against progenitor strains, beta and delta variants; however, there were relatively fewer mAbs in each cohort that were active against BA.1 and BA.5 variants. 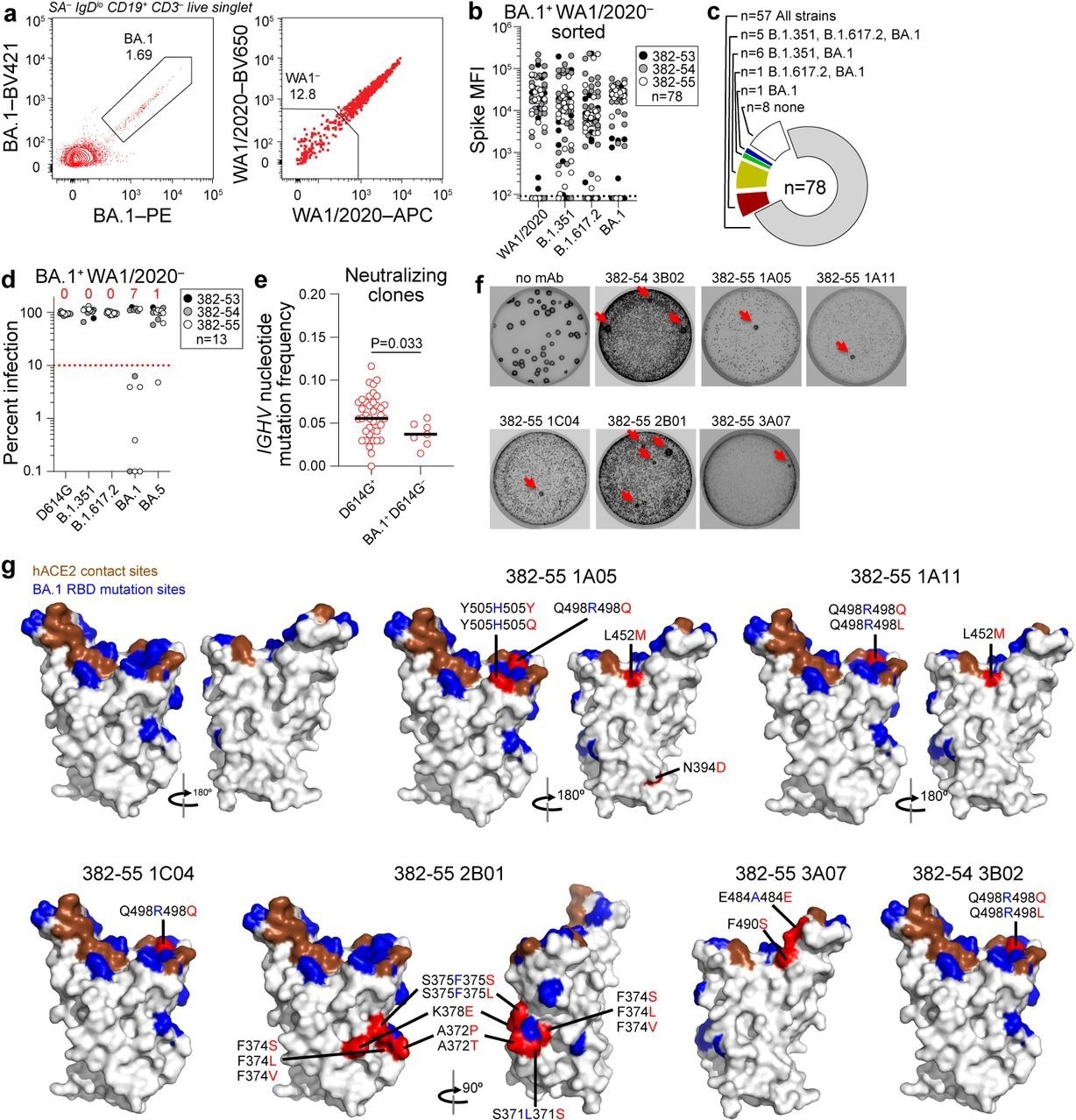 Characterization of BA.1-specific mAbs. (a) gating strategy for BA.1 sorting+ WA1/2020− MBC from 17 weeks after the booster PBMC. (b) Binding of mAbs from BA.1+ WA1/2020− Sorted MBCs to indicated strains of SARS-CoV-2 S measured by multiplex bead-binding array. (c) Summary of mAb binding. (i.e) neutralizing activity of BA.1+ WA1/2020− Binding of mAbs against the indicated strains of authentic SARS-CoV-2 virus. The numbers above each virus refer to mAbs below the 90% infection reduction threshold. (e) IGHV mutation frequencies of clones associated with mAbs from participants 382-54 and 382-55 that neutralized D164G (left) and BA.1 but not D614G (right). Black lines indicate medians. Each symbol represents a sequence; n=39 for D614G+ and n = 7 for BA.1+ D614G−. (f) Plaque assays on Vero E6 cells with indicated mAb in overlay to isolate escape mutants (red arrows). Images are representative of three experiments per mAb. (G) Structure of RBD with hACE2 footprint highlighted in brown, BA.1 mutations highlighted in blue, and amino acids whose substitution confers resistance to the indicated mAbs in plaque assays highlighted in red.

bioRxiv publishes preliminary scientific reports that have not been peer-reviewed and therefore should not be considered conclusive, guide clinical practice/health behavior or treated as established information.