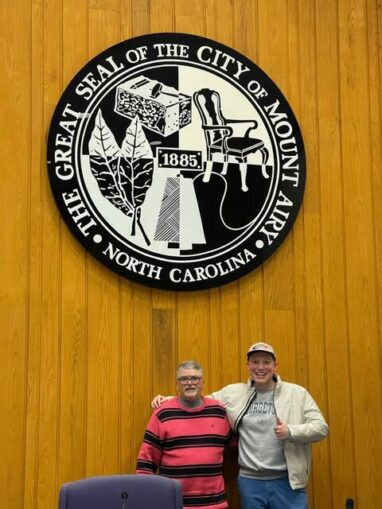 Mitchell Whitley — a native of Greensboro and a resident of Raleigh — visited Mount Airy earlier this year and spent a few hours in town on a Sunday afternoon.

He also visited Elkin in the spring and recently returned through Surry County to spend a few hours at Pilot Mountain — and he’s hoping to return to that part of the state to tour Dobson.

He has also visited nearby Sparta, North Wilkesboro, and other cities throughout North Carolina, from the mountains to the coast. Overall, Whitley has visited more than 150 North Carolina cities, specifically meeting with the mayors of each community.

That’s his goal – to meet with the mayors of the incorporated cities of North Carolina.

Its purpose? That’s a bit nebulous, although Whitley said he wants to learn more about the challenges local government faces, how to overcome those obstacles, and to be “a better advocate for local affairs”.

He’s also developed a cool looking website called Mitchell’s Mayors and he’s aiming to write a book about his experiences once he’s done with it.

Since the project is only for a weekend, he probably has a few more years before his work hits bookshelves.

“I spent all my college years pursuing political opportunities,” he said, explaining that he volunteered for several state and federal campaigns and did an internship for Senator Thom Tillis at the US Department of Labor office in Washington, DC , having graduated for six months in the North Carolina General Assembly.

“But I’ve never had the opportunity to experience local government.”

So Whitley said he found that the best way to learn about local government, to get a feel for the challenges and opportunities facing cities big and small, is to meet with mayors of those cities. All of them.

“So I started calling mayors to see if they would meet me. I thought they could give me great insights.”

This month marks a full year since the beginning of his quest. He used to be able to visit a few towns on weekdays, but soon he was working full-time, so visiting the mayors became a weekend project.

In January he visited Mount Airy and spent a few hours with Mayor Ron Niland. Unlike most mayors Whitley has met, Niland has served as a city manager and as a contractor providing services and advice to other cities, so his experience was a bit broader.

“We were one of his early visits,” Niland recently recalled. “It was a very interesting visit, it came, it was actually on a Sunday. I met him down at City Hall… I enjoyed our visit, we spent an hour, an hour and a half talking about issues in the city and other cities. This is a great undertaking; I think it’s an interesting project.”

At the time, Whitley was traveling with his father, who accompanies him on trips, but few knew about his project.

“I encouraged him to create a website and I think he did it,” said Niland. “He has kept in touch with me on occasion, mostly through messages, especially when he comes across a mayor who knows me.”

“My visit was amazing,” Whitley said of his time at Mount Airy. “My father has been there many times, but I had never been there. To visit the city that Mayberry is written after is really something special.”

He said that although the day was cloudy and cool, he was surprised by the number of people shopping on downtown’s Main Street.

Also Read :  The Surprising Mineral You Should Eat More Of For Fine Lines And Wrinkles, Experts Say

He found the meeting with Niland particularly instructive.

“He spent so many years as a city manager in other communities and worked for cities across the state. It gave him a really great idea and perspective on how he could step in as mayor and work well with the people… getting things done on everyone’s behalf. When a mayor has that kind of experience, it’s great, he can get a jump-start.”

“I look forward to your city, more people should be able to come and stay and experience how special your community is.”

“I’ve been to the mountain, of course, to the state park, but I’ve never been to town.”

He said Cockerham spent time with him, talking about changes in the city and all the weekend events that are planned throughout the year, and guiding him to what he called a “very, very good restaurant”, the Tilted Ladder .

“I hadn’t heard of his project until he contacted me,” Mayor Cockerham said of their August 27 visit. He was struck by the scope of Whitley’s plan.

“It is a daunting task to contact every mayor, let alone visit them. I just found it a very fascinating project, I had never heard of anything dealing with communities on this scale. He spent a few hours with me… Most of the questions were 50/50 about my personal story of what makes someone want to be mayor and then he gave me the opportunity to tell the story of our community, what brought us has got to where we are today.”

So far, Whitley has achieved almost a third of his goal of meeting all the mayors – and he’s already encountered some unexpected stories and people.

“There are many things that stand out,” he said of the cities he has visited. Among them are asked to drive the mayor’s car in a Christmas parade; meeting a man who has worked for seven different Presidents at Air Force 1; knowledge of a still unsolved passenger plane crash in the city of Bolivia in 1960; one of the largest collections of Americana memorabilia in the US – including a crushed beer can from the plane flight the band Lynyrd Skynyrd was riding on when it crashed; a paranormal museum; and a mayor who spends some of his free time looking for Big Foot.

“Who could ever see something like this if they didn’t take the opportunity to travel across the state and speak to the people in the communities?”

Whitley said the project has evolved since it began. At first it was just a matter of meeting with the mayors and learning about their cities. He has since launched the website proposed by Mayor Niland and added plans for the book.

He cannot say whether the visits could catapult Whitley into a political career.

For the mayors of Mitchell, including photos and some information on all the cities Whitley has visited, go to: https://www.mitchellsmayors.com/