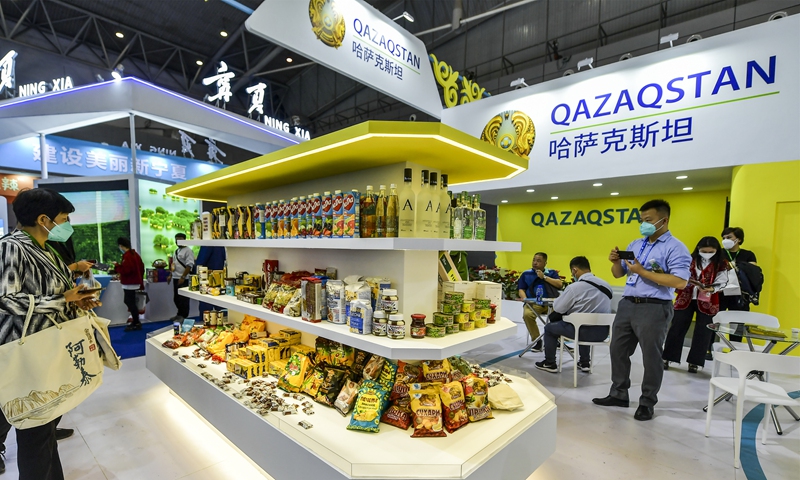 Companies attending the 7th China-Eurasia Expo in Urumqi, northwest China’s Xinjiang region, said the increased use of the yuan in cross-border trade in Central Asia makes business more convenient and reduces exchange rate risks stemming from the use of the U.S. dollars, and they demanded more provisions to allow yuan payments in more countries.

Experts said the yuan’s internationalization process has gained momentum lately after an agreement was reached between China’s central bank and the central bank of Kazakhstan on Tuesday to set up yuan clearing arrangements in Kazakhstan.

Zhang Sixin, chairman of a logistics company based in Xinjiang, said his company has increased the use of the yuan as a currency for cross-border settlements. Most recently, his company forwarded 3.5 million yuan ($496,500) to partners in Kazakhstan through a Chinese bank.

Zhang said foreign exchange gain or loss poses a risk to the company’s operations, and recalled an “incident” where the company lost 70,000 yuan due to a delay of several hours. “That’s why we value this service very much,” he said.

Zhang Hongping, chairwoman of the Xinjiang-based Ya’ou International Materials Exchange Center Co, told the Global Times on the sidelines of the expo on Wednesday that for her company, which is engaged in cross-border trade in commodities, the availability of cross-border settlement in yuan would be a great blessing.

“Such an idea has been mooted more frequently in recent months, and our cooperation partners — the exchanges in Uzbekistan and Belarus — also agree to include settlement in yuan once conditions are ripe,” Zhang said, noting for commodities settlement such as timber, minerals and consumer goods, the conversion to the yuan would greatly benefit the exchange.

Zhang’s exchange is trying to team up with exchanges in Uzbekistan and Belarus and form an exchange alliance of Shanghai Cooperation Organization (SCO) member countries, and she noted that it would be great to have yuan settlements on the network.

Xinjiang could play an important role in expanding the yuan’s use in cross-border settlements with Central Asian countries, analysts said.

Amid rising geopolitical risks, talk of using the yuan as a settlement currency in Central Asia has received increasing attention.

Djoomart Otorbaev, former Prime Minister of the Kyrgyz Republic and distinguished professor at Beijing Normal University’s Belt and Road School, wrote in an article on CGTN in April that it would be unwise to continue using the US dollar for financial transactions in Central Asia.

Using the yuan as the strongest regional currency will be essential for more stable and predictable economic and trade relations between Central Asia and China, Otorbaev argued, noting that policymakers should pay special attention to reforming the system of interactions of national currencies and shape it safely that the new principles will not bring uncertainty and nervousness into economic relations, but will become a source of development and stability.

Trade and economic ties with Russia and China are the most important for Central Asian countries, analysts noted.

Amid the West’s SWIFT sanctions against Russia and rising geopolitical conflicts, more and more Central Asian countries were beginning to realize the importance of having an alternative for international payments, said Zhou Yu, director of the International Finance Research Center at the Shanghai Academy of Social Sciences.

“Now we’re seeing not only awareness, but concrete steps in that direction,” Zhou told the Global Times on Wednesday.

Zhou said a series of announcements in recent weeks have shown that the global process of de-dollarization has accelerated, prompted by US sanctions on Russia and aggressive Fed rate hikes prompted by countries over concerns about capital outflows would be considered risky.

On September 16, the heads of state and government of the SCO member states signed and published the Samarkand Declaration, which called for continued expansion of cooperation in the settlement of local currencies.

A day earlier, a meeting between the leaders of China, Russia and Mongolia also emphasized efforts to achieve more results in trilateral cooperation and expand settlement in local currencies in trade.

Russian and Mongolian financial institutions were welcomed to join the yuan-based cross-border interbank payment system to build a strong bulwark of financial security in the region.

Referring to its agreement with the Central Bank of Kazakhstan, the People’s Bank of China said the agreements will help both countries’ companies and financial institutions conduct cross-border transactions with the yuan, while facilitating bilateral trade and investment.

However, for the yuan to expand its presence in Central Asia, it will take time and more concrete action.

“Now, with the changing geopolitical landscape, more and more countries in Central Asia are willing to accept the yuan, but domestic banks need to open branches in those countries first [for the clearing function]’ said Zhang Hongping.

Uzbekistan, Tajikistan and Kyrgyzstan still have no presence of Chinese banks, Zhang said.

Zhou said that the yuan’s relatively stable exchange rate and market expectation of gradual appreciation have ensured its popularity in many developing countries, and suggested that outsourcing the clearing business to banks in some of the partner countries could be a way to expand the cross-border scale of the yuan Yuan to speed up settlement in the region.