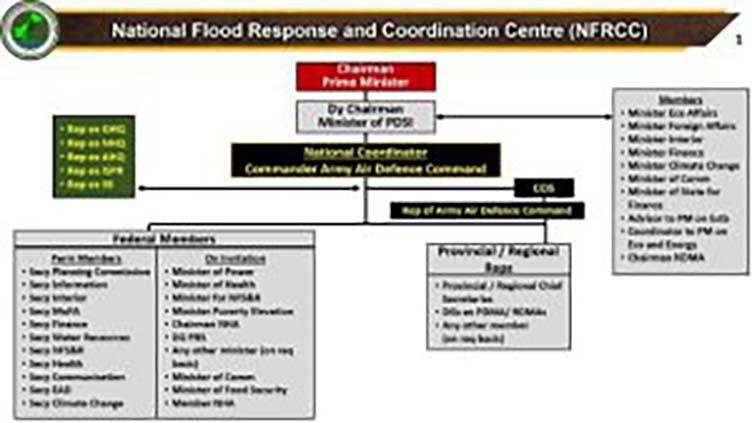 No infrastructure damage reported in the last 24 hours: NFRCC


No infrastructure damage reported in the last 24 hours: NFRCC

ISLAMABAD (Dunya News) – The National Flood Response and Coordination Center (NFRCC) said Sunday that no infrastructure damage had been reported in the past 24 hours.

A total of 13,074 km of roads and 392 bridges have been damaged so far since the monsoon torrential rains began.

The report also underscored the weather forecast for the past 24 hours. The weather remained hot and dry in most parts of the country. However, rain, wind and thunderstorms hit Upper Punjab and Kashmir.

However, the highest maximum temperatures (°C) recorded were 41 in Sibbi, 40 in Bhakkar, Sukkur and Rahim Yar Khan.

Partly cloudy weather was expected over the next 24 hours in most of the upper parts of the country with rain winds and thunderstorms (isolated heavy falls) in upper Punjab, Kashmir, upper KP, Islamabad and GB. “Elsewhere in the country, hot and dry weather is likely to prevail.”

The Army relief effort included airborne efforts for evacuation and relief efforts.
So far, 619 Army Aviation helicopter missions have been flown to various areas to evacuate stranded people. A mission was flown in the last 24 hours and two tons of relief supplies were delivered to the flood victims. In addition, 4,659 stranded people have been evacuated by helicopter operations so far.

So far, over 300 medical camps have been set up, treating more than 566,089 patients across the country and providing them with free medicine for 3-5 days.

The Pakistan Navy’s relief and rescue efforts were also well underway, as the Navy had established four flood relief centers and 18 central collection points across the country.

The Navy has so far distributed 1,758 tons of rations, 6,407 tents and 727,848 liters of mineral and fresh water in different districts. Also, 19 tent cities were established in Qambar Shehdad Kot, Dadu, Bhan Syedabad, Sukkar and Sujawal; with 25,097 employees housed and cared for.
In addition, the Pakistan Navy’s 23 Emergency Response Teams (ERTs), deployed across Pakistan, have rescued 15,565 stranded personnel to date. These ERTs were equipped with 54 motorboats and two hovercraft. The Pakistan Navy has also deployed two helicopters inside Sindh. To date, these helicopters have rescued 478 stranded people and distributed 5,258 food packages in 70 sorties. Eight Pakistan Navy diving teams have also conducted 27 diving operations in affected areas across the country.