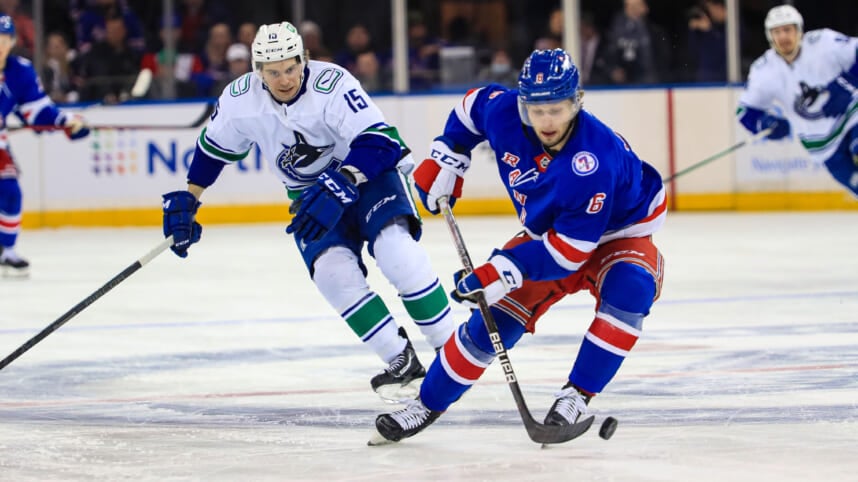 The New York Rangers’ toughest competition will come on defense, with four players battling for sixth and seventh place when the players hit the ice on Thursday.

The New York Rangers have another strong defensive core this season. Their Top 4 of Ryan Lindgren, Adam Fox, Jacob Trouba and K’Andre Miller could be one of the top two pairings in the National Hockey League.

Braden Schneider holds the fifth defensive spot for the time being. Three players battle it out for sixth and seventh place in a hard-fought battle culminating in the final days of camp.

Who will win the opening fight in defense?

The Blueshirts have four players who will compete for two spots on the roster.

To be clear, the sixth slot is losing to Zac Jones. He only played 12 games for the Blueshirts last season. Although he was disappointed when he was sent to Hartford by the AHL, he felt the move was the best thing to do to improve his game. Last week he was part of the team’s rookie camp and in their two games against the Flyers rookies, he wore the “C” as he tried to work with the other players and learn how to be a pro on and off the ice .

Libor Hajek has been with Rangers since the 2018-19 season and has played 94 games in his career. The 24-year-old has never been able to take command on the ice and has mainly served as a seventh defender (which I believe he will do this season). Most games he has played in the NHL was 44 in the 2020-21 season.

Matthew Robertson, selected in the second round of the 2019 NHL Draft, has not yet played a game in the NHL. Last season, he played in 65 games as a member of the Hartford Wolf Pack, scoring 11 points (one goal).

Matt Bartkowski signed a PTO with the team last week and was invited to camp. The 34-year-old defenseman is a 10-year NHL veteran but has not played more than 24 games since the 2016-17 season. Last year he played in the AHL for the Wilkes-Berrie/Scranton Penguins.

Zac Jones will win sixth place and will be paired with Braden Schneider. Libor Hajek will be the seventh defender, same role as last season.

Robertson is being sent back to Hartford, but he will get an opportunity to play with the blueshirts this season as he will be the next defenseman to be called up when the time comes.

Bartkowski will most likely be fired. He was hired to increase the competitive factor on the blueline, but with the team manned with the defender across the organization, it’s doubtful he’ll be signed.

Commemorative coverage runs through October 15 and celebrates the
Cultures and histories of Puerto Rico, Mexico, Spain and other Hispanic countries in the Caribbean,
Central and Central America.

As part of Rangers Hispanic Heritage Night at Madison Square Garden on Thursday, October 20, MSG
Networks will provide Spanish language audio coverage of the Rangers game against San Jose
night at 7:00 p.m. ET. The additional audio will be available by selecting the SAP setting in the broadcast,
This marks the first time the network has ever offered a Spanish audio call of an NHL game.

-A sit-down interview with former Giants star Victor Cruz and current Giants offensive lineman Jon
Feliciano on her Hispanic heritage. Cruz and Feliciano will share about their culture and dish
everything from family to football to food and more
-Profiles of authentic Hispanic eateries across New York City, including Queens
Restaurant The Freakin Rican and the popular Red Hook food vendors in Brooklyn
-Interview with award-winning baker Bryan Ford about the different variations of empanadas
-Feature on menswear designer and Honduran-born Ijay Sanchez on his career in the fashion industry. (per MSG Networks version)