Almost every government in the world has failed to improve their climate plans this year, breaking a promise they made at last year’s climate summit in Glasgow, UK.

At Cop26, all countries agreed to “revise and strengthen” their 2030 climate plans to close the gap between national action and the Paris Agreement temperature targets.

September 23 was the deadline for inclusion in a UN progress report on climate change and was highlighted as a deadline by Cop26 President Alok Sharma.

By the time that date passed, only 23 of the nearly 200 countries that had signed the Glasgow Accord had presented updated 2030 climate plans. Of these, most offered more policy detail rather than strengthening core objectives.

The three largest emitters, the US, the EU and China, worked to implement the commitments made last year but did not increase their ambition. India formalized Prime Minister Narendra Modi’s promises at Cop26 in an official four-page document.

Bill Hare, CEO of Climate Analytics, said in a webinar last week: “The bottom line is that there has been really little progress since Cop26. Politics and geopolitics are dominated by the illegal Russian invasion of Ukraine, which then roiled energy markets, but we still think countries should move forward.”

He added: “There remains a massive emissions gap and the IPCC assessment was very clear that if we have a big chance of limiting warming to 1.5C, we need to rush and close this gap.”

23 parties, including the UK 🇬🇧, have submitted new or strengthened NDCs @UNFCCC since COP26

I encourage all countries, and especially the big emitters, to do this in advance #COP27

Among the major emitters, Australia stands out due to a clearly rising ambition. The newly elected Labor government raised its target for 2030 to 43% from 26-28% over 2005 levels, a similar level other developed economies.

Indonesia, Cop27 hosts Egypt and Cop28 hosts the United Arab Emirates presented tougher targets, while the UK clarified how it would achieve its emissions cuts.

Indonesia improved its unconditional target for 2030 from 29% to 31.89% compared to a business-as-usual forecast level. With international funding, it could achieve a 43.2% cut from 41% in the previous plan.

Cop27 host Egypt has quantified its emissions reduction targets for the first time. But the plan only covered certain sectors, not the economy as a whole, and is entirely dependent on international funding.

Cop28 host UAE improved its emissions reduction target for 2030 from 23.5% to 31% compared to a business-as-usual basis.

Brazil increased its 2030 target to 50% from 37% compared to 2005. But it also changed the way 2005 levels were measured, making the target easier to achieve. As a result, Brazil’s updated climate plan is less ambitious than before, according to Climate Action Tracker.

In June, several major emitters announced they were updating their climate plans, but have not yet done so. These countries were Chile, Mexico, Turkey and Vietnam.

The European Union is reportedly planning to update its climate plan to boost medium-term ambition since the Russian invasion of Ukraine.

Though countries like Germany have been feverishly scrambling for gas deals to get through the coming winter, in response to the invasion, they plan to move away from fossil fuels more quickly by 2030.

The US has not updated its target but has made great progress with the passage of the Inflation Reduction Act.

Analysis by the Rhodium Group suggests this will reduce US emissions by a billion tons of carbon dioxide equivalent per year by 2030.

If the EU and the US score ahead of China, Africa suffers

Climate Action Tracker estimates that by 2030, 17 to 20 billion tonnes of carbon dioxide equivalent per year are missing from 1.5°C global warming.

At Cop26, Climate Action Tracker predicted the world was on track for global warming of 2.7°C due to government policies.

In an optimistic scenario, where governments implement all of their announced targets, global warming could be limited to 1.8°C, they said. This latter forecast was confirmed by the International Energy Agency. 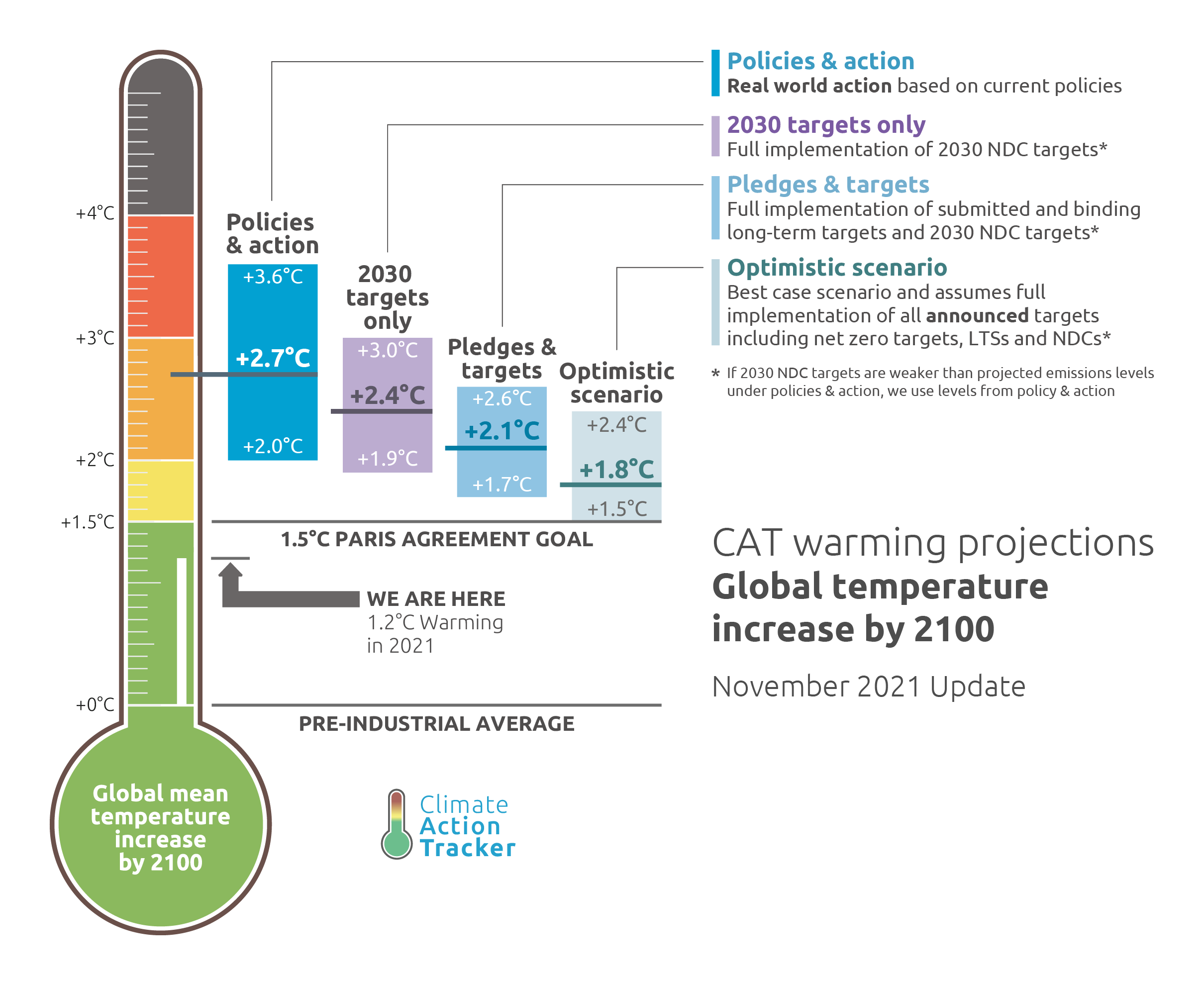 In some areas, governments have gone backwards since Cop26, Hare said. “The Russian invasion of Ukraine has created a global energy crisis and the upshot of that from my point of view is that we are seeing the oil and gas industry really taking advantage of this and encouraging massive gas developments, particularly in Africa, Asia and Australia, which is growing The goals of the Paris Agreement are unachievable if implemented.”

Also Read :  10 Of The Best Sources To Help Money With Worries During The Cost-Of-Living Crisis

Hare added that the European Union has encouraged this gas development by classifying gas as a green investment in its “sustainable taxonomy”. “It’s used rhetorically around the world to justify gas as green,” Hare said.

UN chief: Windfall tax on oil and gas can account for losses and damages

Speaking at New York Climate Week, he added: “I was at a reception last night and heard leaders from Latin American countries talking about what green gas was like because the Europeans said it was. I’ve heard that from Africans, too.”

The CEO of the European Climate Foundation, Laurence Tubiana, told reporters last week that the energy crisis has pushed governments, particularly in Europe and China, back to fossil fuels.

That has “weakened” the commitments made at Cop26 in Glasgow, she said, adding that the real economy continues to move in the right direction.