Elaine Vermeersch, left, and Victoria Mobley stand in front of the Lucy Trailer in their I Love Lucy costumes. Vermeersch has decorated the vintage Scotty trailer to pay tribute to the 1950s television sitcom. 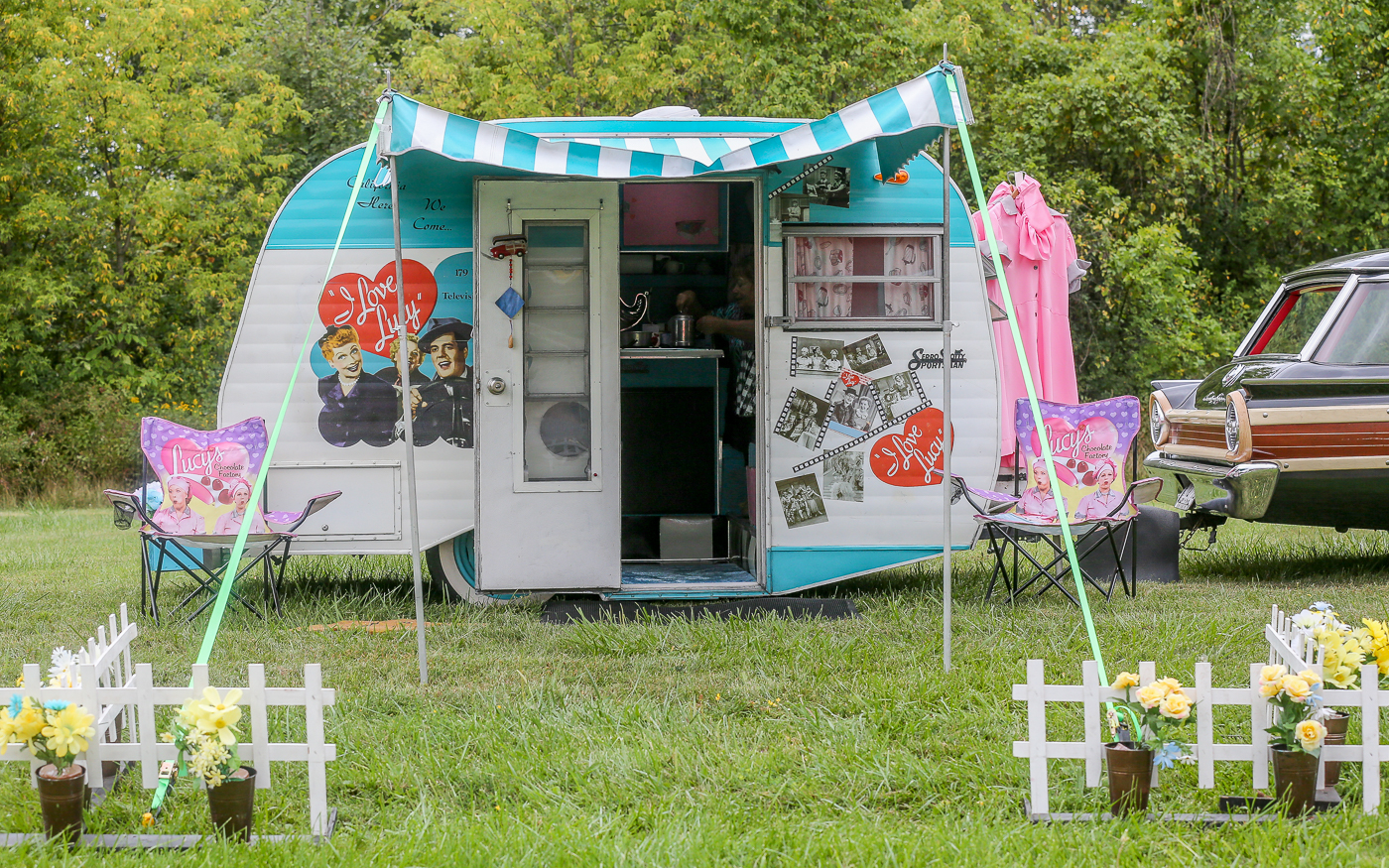 METRO DETROIT – Talk about a classic.

15 years ago, Elaine Vermeersch and her husband John bought a Scotty trailer that they had put their heart and soul into.

The previous owner had started decorating the 13-foot vintage trailer with an “I Love Lucy” theme based on the 1950s television sitcom. Vermeersch fell in love with the camper and added more “I Love Lucy” memorabilia to complete the look.

“I’ve always liked Lucy,” said the Chesterfield Township resident. “I think she was the greatest comedian of all time.”

I Love Lucy starred Lucille Ball and Desi Arnaz as Lucy and Ricky Ricardo, who engaged in many shenanigans with their best friends Ethel and Fred Mertz, played by Vivian Vance and William Frawley.

Looking at the “Lucy Trailer” brings back fond memories of the quartet. While the exact year the classic motorhome was made is a bit of a mystery, Vermeersch says it’s likely a late 1960s or early 1970s model.

“You know it’s vintage when you walk in,” said Vermeersch, who grew up in East Detroit, now Eastpointe. “My grandchildren love it. They think it’s a small house.”

The caravan definitely feels like home. Inside there is a tiny dining table that seats two in an alcove. The caravan also has a bed covered with a fashionable ‘I Love Lucy’ blanket that fits two comfortably. The table can become a bed, allowing family and friends to stay overnight.

A stove, mostly for show, and an old-fashioned ice box give the Scotty model a nostalgic flair. The interior is painted turquoise and pink, complemented by Lucy knick-knacks on display. One of the few more modern pieces is the DVD player, which guests can settle into to watch “I Love Lucy.”

The outside is adorned with black and white photos of the sitcom. Viewers can see some of the series’ most iconic lines applied to the exterior. In homage to the 1954 film The Long, Long Trailer, starring Ball and Arnaz, Vermeersch affixed the phrase “The Short, Short Trailer” to the back of the RV. Vermeersch said she and John camp quite a bit with the Lucy trailer, which was pulled by a 1961 Ford Country Squire station wagon or a 1957 Ford Del Rio.

“It’s just down the road,” Vermeersch said. “We get a lot of waves and a lot of horns beeping.”

It was at Algonac State Park, Traverse City and St. Ignace. When they set up camp, the Vermeersches set up a white picket fence and two “I Love Lucy” chairs with pictures of the famous “Job Switching” episode in which Lucy and Ethel got jobs at a chocolate factory.

The Lucy Trailer is also a staple of local auto events including the Woodward Dream Cruise, Autorama in Detroit, the Shorewood Kiwanis Club of St. Clair Shores Harper Charity Cruise and Cruisin’ Hines in Wayne County.

“It’s the focus,” said Vermeersch’s friend Victoria Mobley of Harrison Township. “Isn’t it comfortable? It’s a different experience when you go inside.”

READ:  15 Style And Wellness Essentials For Your Next Fall Trip

It was Mobley, married to automotive historian Top Hat John, who made two pink uniforms similar to those worn by Lucy and Ethel in “Job Switching”. Visitors can don the robes and hats to take photos of themselves standing next to the trailer looking just like Lucy and Ethel.

One of the best times Vermeersch and Mobley had was at a car show in Marshall, Michigan. The couple slept in the trailer overnight. The next morning they got up bright and early, donned the pink robes and greeted everyone who entered the show.

Viewers are always welcome to jump into the trailer for the full experience.

“I let people in,” Vermeersch said. “That’s what it’s for. That’s the fun part – meeting people.”

Do you own a vehicle with an interesting history? Email Maria Allard at [email protected] for a chance to participate in a future edition of Behind the Wheel.

An Icebreaker for the Business Club – News

Cleveland Guardians end regular season with 9-2 win over KC; on to the postseason

Chef Nischan Feted By Table To Table At Annual Gala