Hall called the year-long collaboration “truly” a team effort. “The entire team at KTLA and Nexstar have been great partners throughout the design and construction process,” he said.

Hall focused the design for KTLA on the primary anchor area, which sits in front of what is designed to look like a wall of floor-to-ceiling windows with the typical million-dollar views so sought after in the region.

The wall is actually created using 86-inch Philips video panels with structural posts and can be fed with different images showing sweeping views of the region at different times of the day. 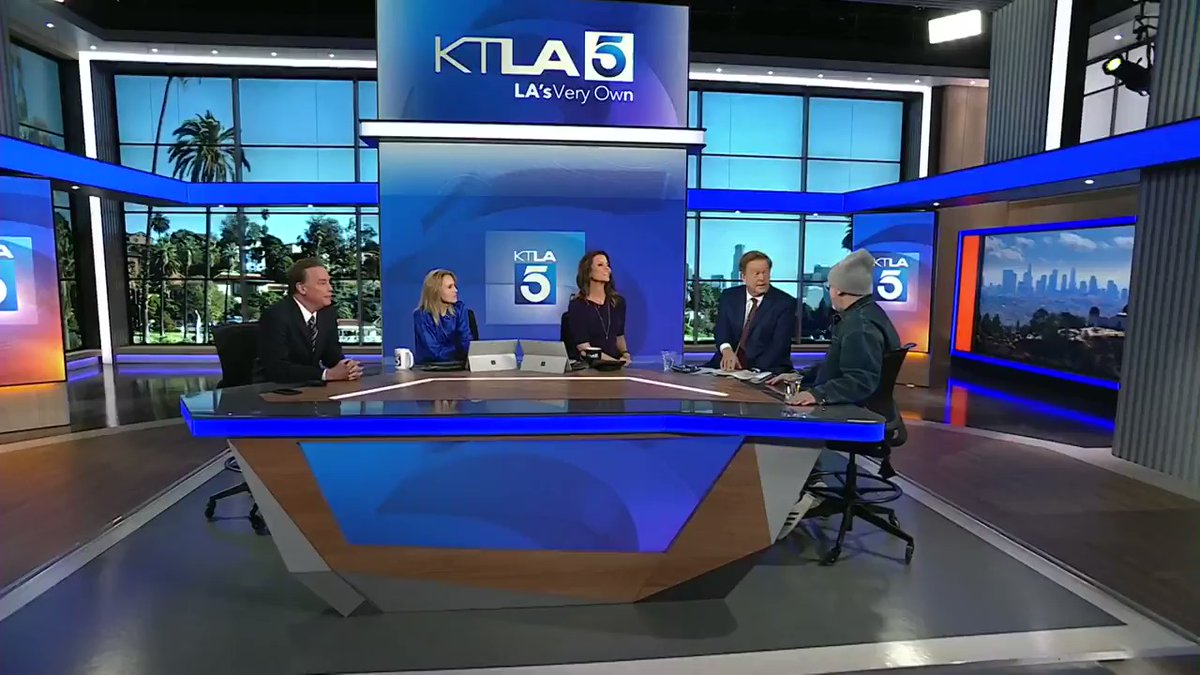 While it’s easy to imagine this wall of windows is inside a celebrity’s hilltop mansion, there’s no attempt to make you feel like you’ve been transported into a home — it’s still definitely a newscast that’s fitting for a station that known for its distinctive, local news program.

For example, Hollywood home allusions pretty much end with a seamless Neoti LED video tower that bisects a wall of faux windows.

This 11-foot-tall LED tower, which sits in front of a digital window wall, is created using two distinct segments. The lower part of the wall is relatively square and serves as the primary visual in anchor shots and can include branding along with current graphics.

A separate segment above the internally lit horizontal band rises to the ceiling and is clearly designed as a header element – ​​something that has been a prominent feature on several previous iterations of the station’s lineup. However, previously this header was static, so switching to LED allows the station to change the logo or images almost instantly.

Overall, the element is bold in its proportions and gives the station the ability to create different views beyond its anchors.

The anchor area is intelligently framed by a series of nested internally lit structural elements that emerge from the floor and across the anchor plate below, drawing attention with their nods to the concepts of forced perspective and vanishing point. 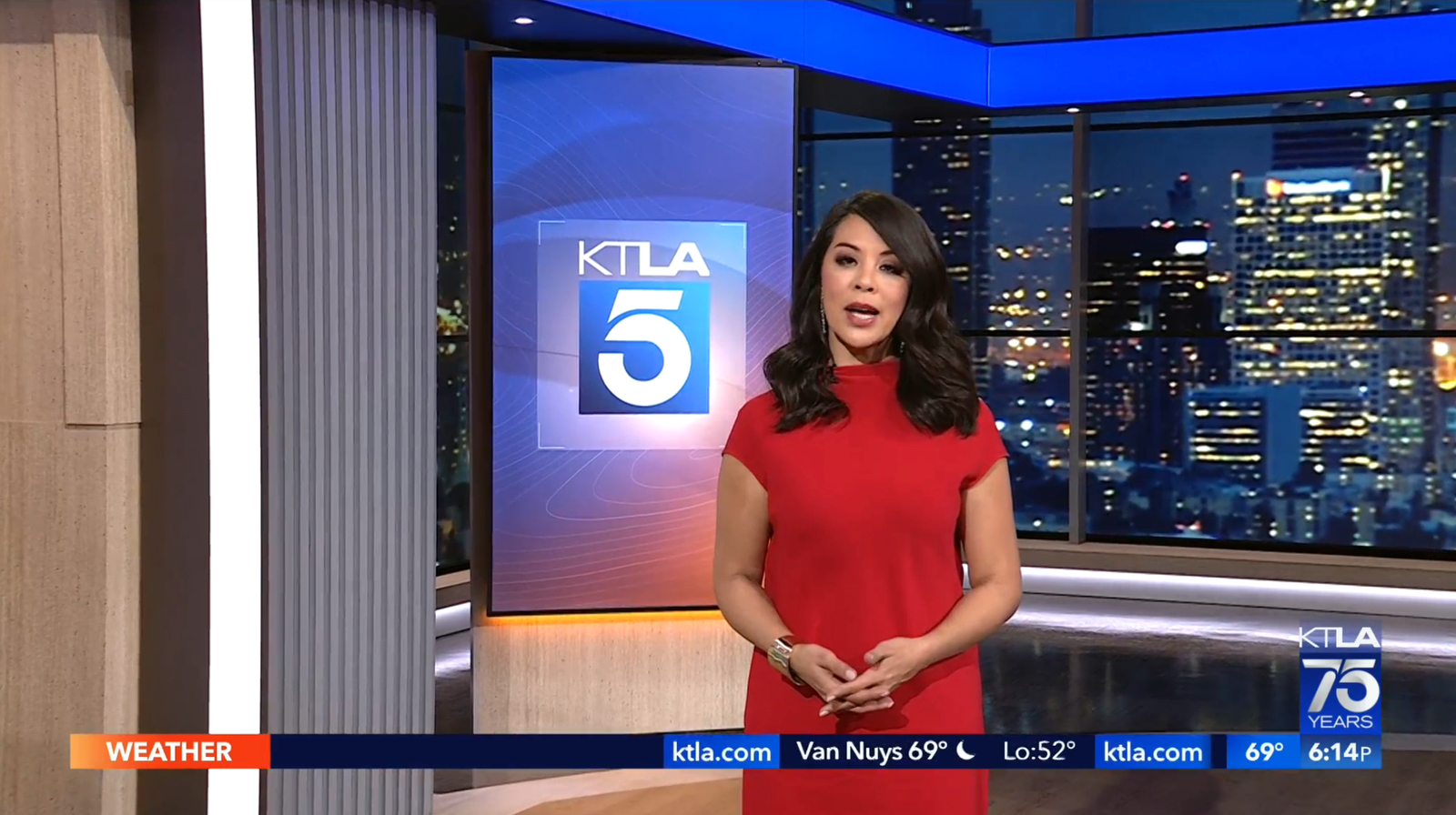 These strong right angles are another theme integrated throughout the current set – and a motif that previous station sets have used extensively, including squares inspired by the footprint of the station’s logo.

Tucked between these arched elements are lighting instruments that, while serving a practical purpose, also become part of the tribute to the region.

The anchors now sit around a table with an edge-lit feature on top of the surprising look – a sort of low-poly base that feels clean and modern yet organic, while channeling the look of the steep geological features of the region.

The camera on the left features a small floor-to-ceiling window look extension along with a free standing vertically mounted video panel designed to be positioned closer to the cameras.

The opposite wall features a similar vertical panel placed a little further in the corner, leaving room for a seamless video wall to be used as a far camera right background.

The table is lined with high-resolution Neoti LEDs and sits on a subtle, sharp-edged base. A smaller rectangular segment attachment that lands roughly midway between the floor and anchor table level is located off-center on the right side of the camera. 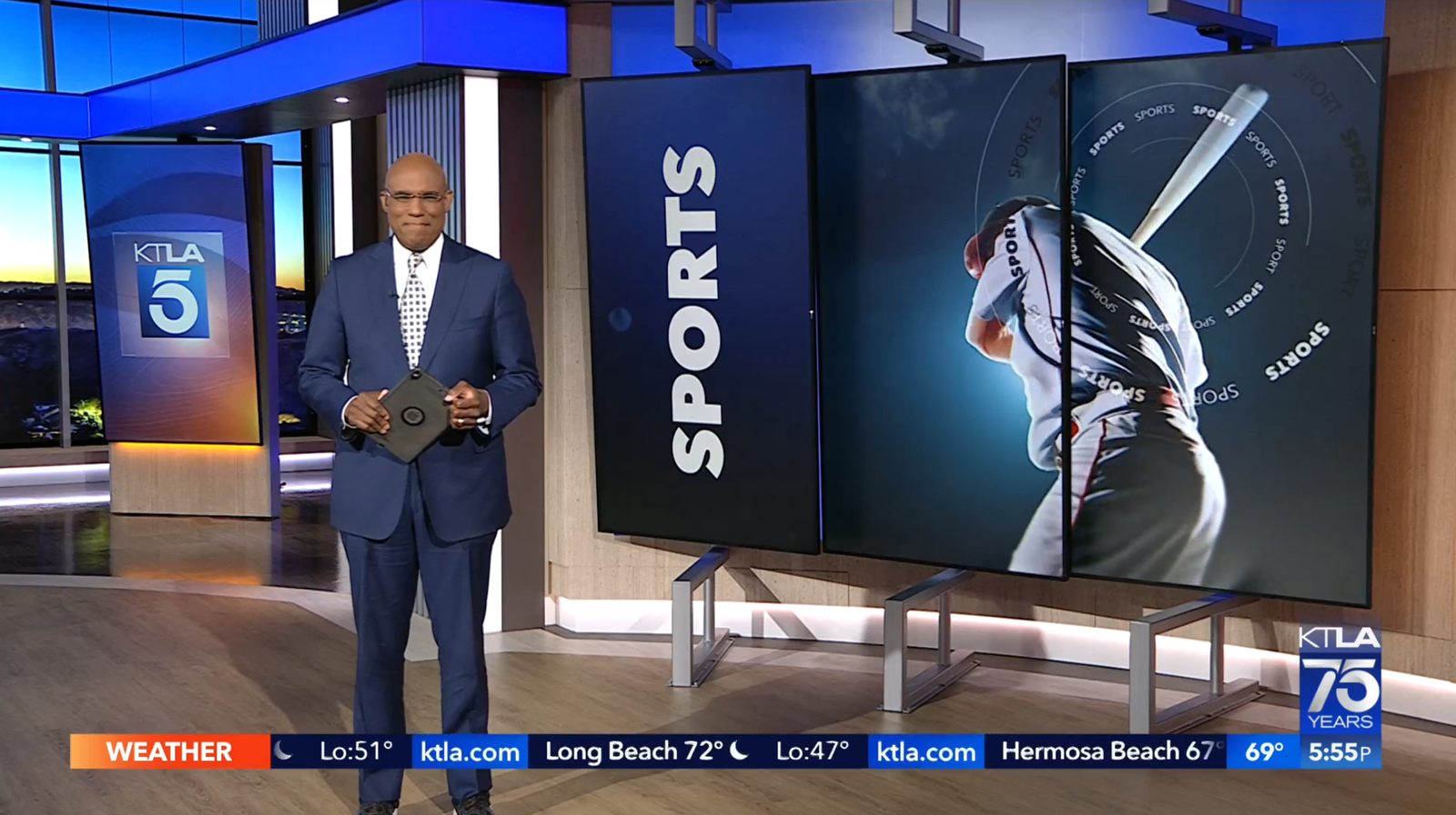 JHD placed a trio of pivot-mounted 86-inch Philips panels set into strong square structures in front of a light, wood-tone wall. This transitions into an opening in the scenery — two sliding matte panels with Asian and Craftsman-influenced grilles with a video wall behind. 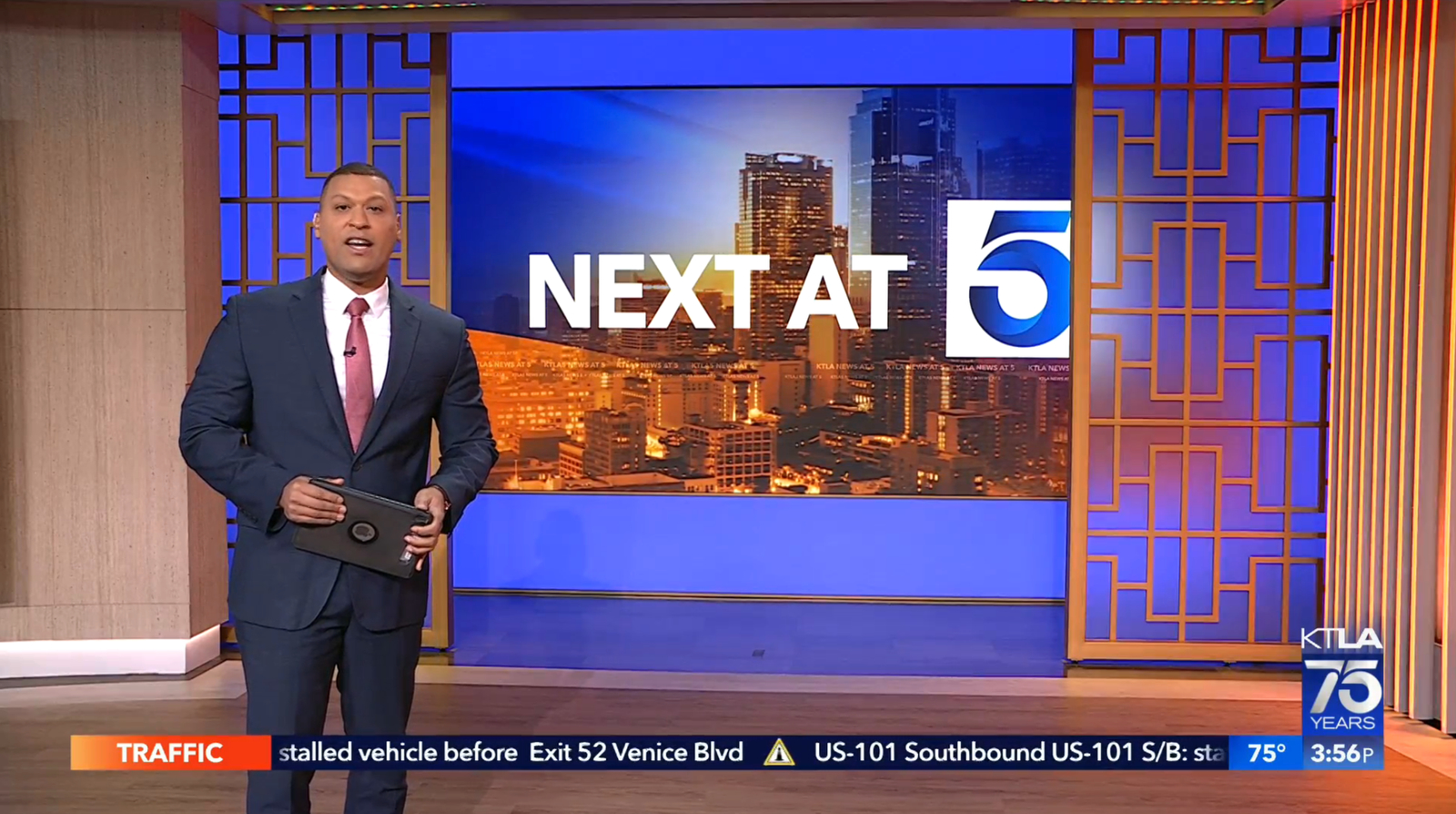 Here again, while the panels have a hint of being something you’d find in a luxury home, the look complements the high-tech backdrops they cover and the sweeping scale to lean the look more newsworthy. In some ways, the generous spacing here also hints at an AR-powered look.

Adjacent to this area is a curved sculptural wall created using a series of strong verticals with integrated lighting set against the rich textures of the wood. This wall folds down and serves as a way to disguise the loading bay for the set, which is located inside one of Warner Bros.’s historic soundstages, which is partly the reason for its sprawling layout. 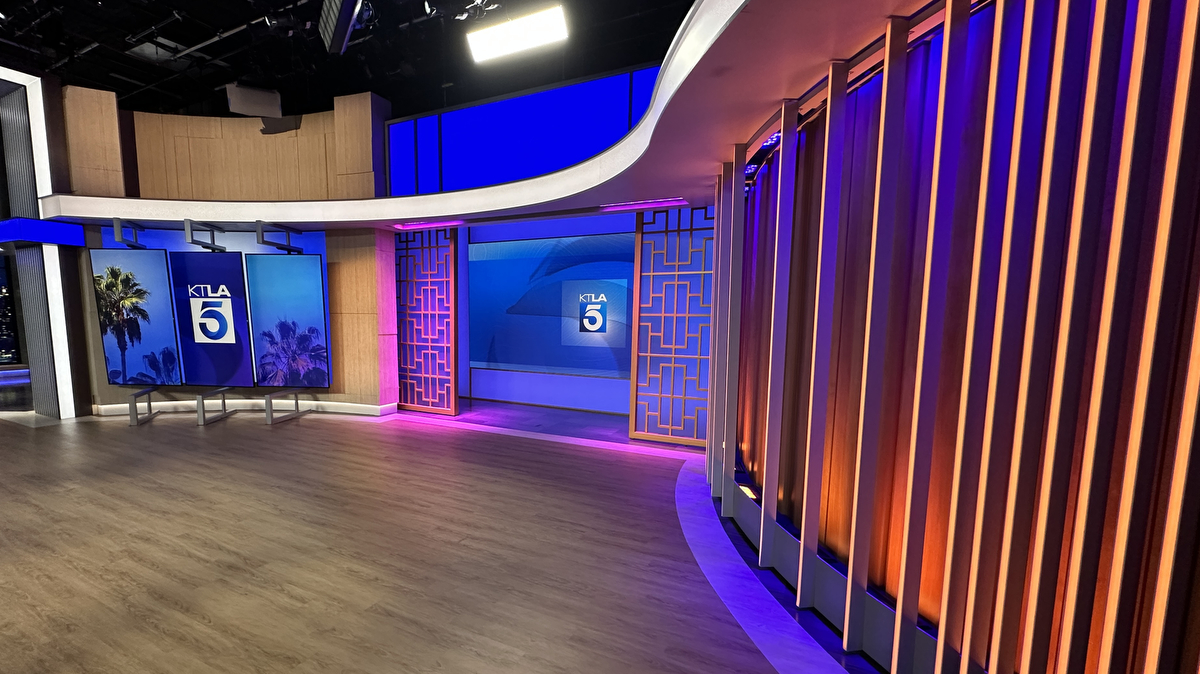 As we continue past the studio, there is a short break in scenery that is basically the “fourth wall” before it cuts to another type of scenery.

The first is a floor-to-ceiling green wall filled with artificial plants placed inside various cubby-shaped alcoves that are framed by light wood. The rich color of the green is offset by the empty spaces, which have the added benefit of adding depth and shadows to the look.

This narrow wall is primarily intended for more informal one-on-one conversations with the use of stools, but it also serves as a diversion to an adjacent space that continues the geometric theme of the cubicle, but without the greenery.

This flexible area can be used for demonstrations, performances or a living room style setting and features a video panel for current footage with a large iteration of the station logo above. There is another segment of green before the set goes to another entry point.

Where the other sliding panel entry is wide, this one is vertical, offering a further nod to craft design with a boxy screen backdrop set in front of a dramatically lit flat wall. This entrance to the set has a unique feature – walking through and turning slightly to the right gives direct access to the station-style outdoor patio, designed for television production.

This placement allows a one-time transition from interior to exterior, which was previously impossible. 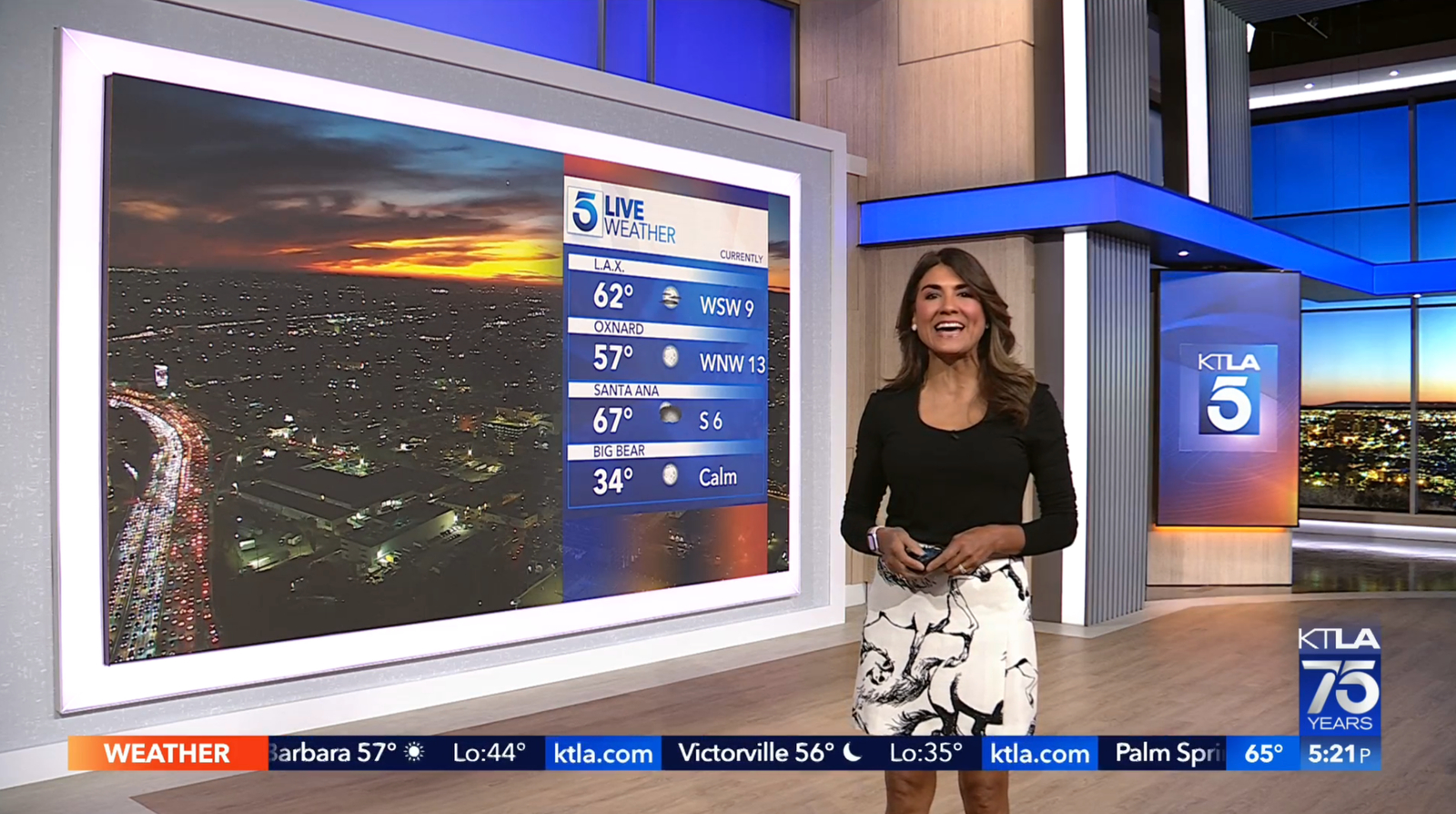 The space between the door and the anchor area, meanwhile, is filled by a 12-by-7-foot Neoti LED wall designed primarily for weather—the station eliminated the use of chroma keying in the studio, but notably didn’t add working weather. center of the set.

Also Read :  Next In Dentistry showcases the future of dental connectivity and education

Another distinctive feature of the set is the possibility of cross-filming between locations. Since the set rotates almost a full 360 degrees, the possibilities for throwing and interacting between areas are extensive. JHD and the lighting team drew numerous types of these shots, giving the station a wide variety of looks and transitions to choose from.

There are also shots that deliberately give the audience a glimpse of the robotic cameras, a nod to the riser of the previous set with the railing placed closer to the fourth wall. 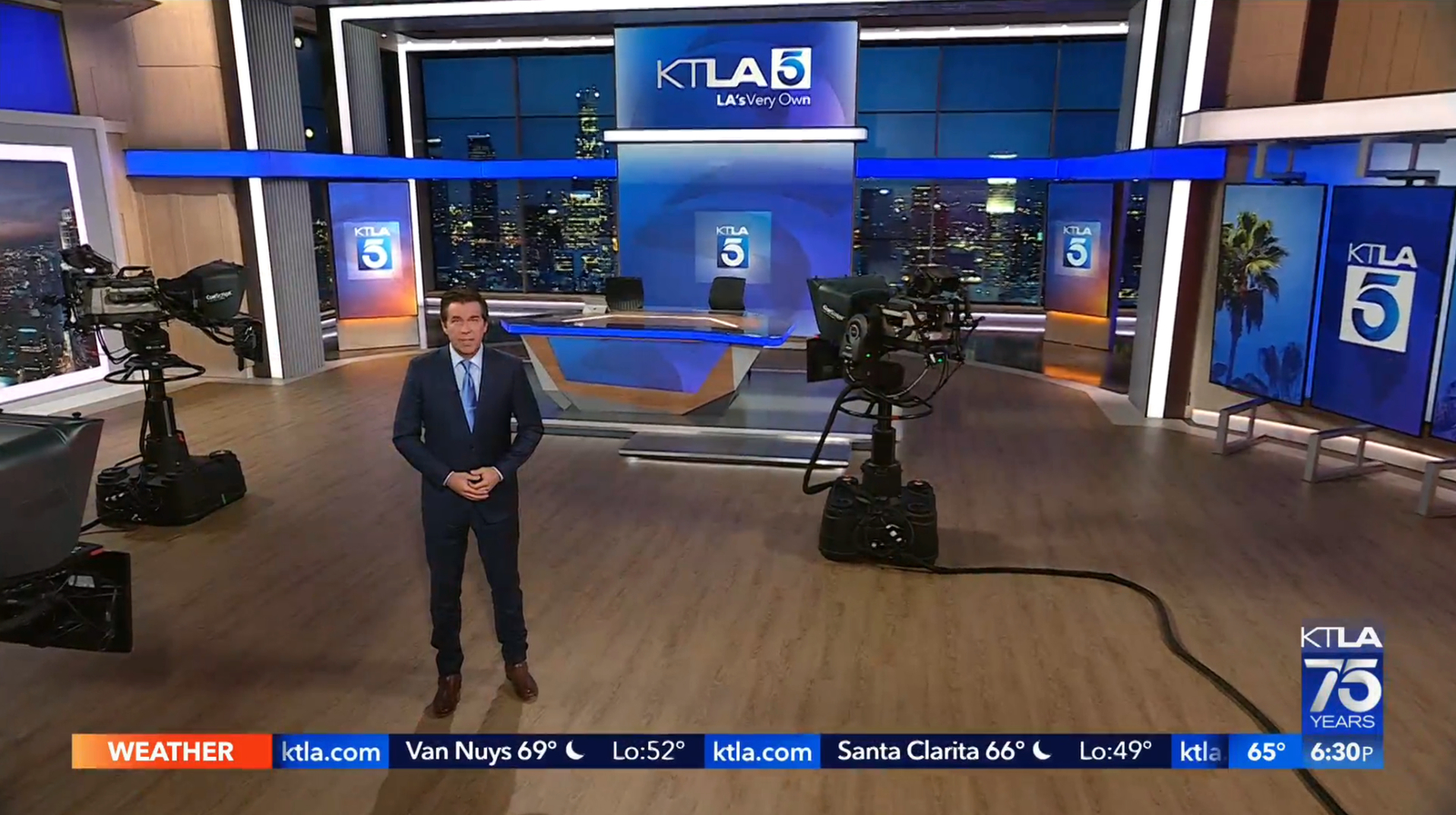 While KTLA’s graphics package remains the same, the station created a new look specifically for the deployed video panels.

This look is dominated by a blue background with a subtly shaded oversized 3D version of the station’s iconic “5” logo. The design can convey the meaning of the number while also suggesting waves of water or a blue sky with puffs of clouds.

When zoomed in, the design features a series of concentric organic shapes that can be read as isobars, bathymetric lines, or topographic map outlines, all of which are elements in the region’s nature.

By default, the station logo is displayed in a matte square prominently between the anchors. The use of a square offset with curved elements brings together many of the same visual language elements found in the set and other parts of the station’s appearance.