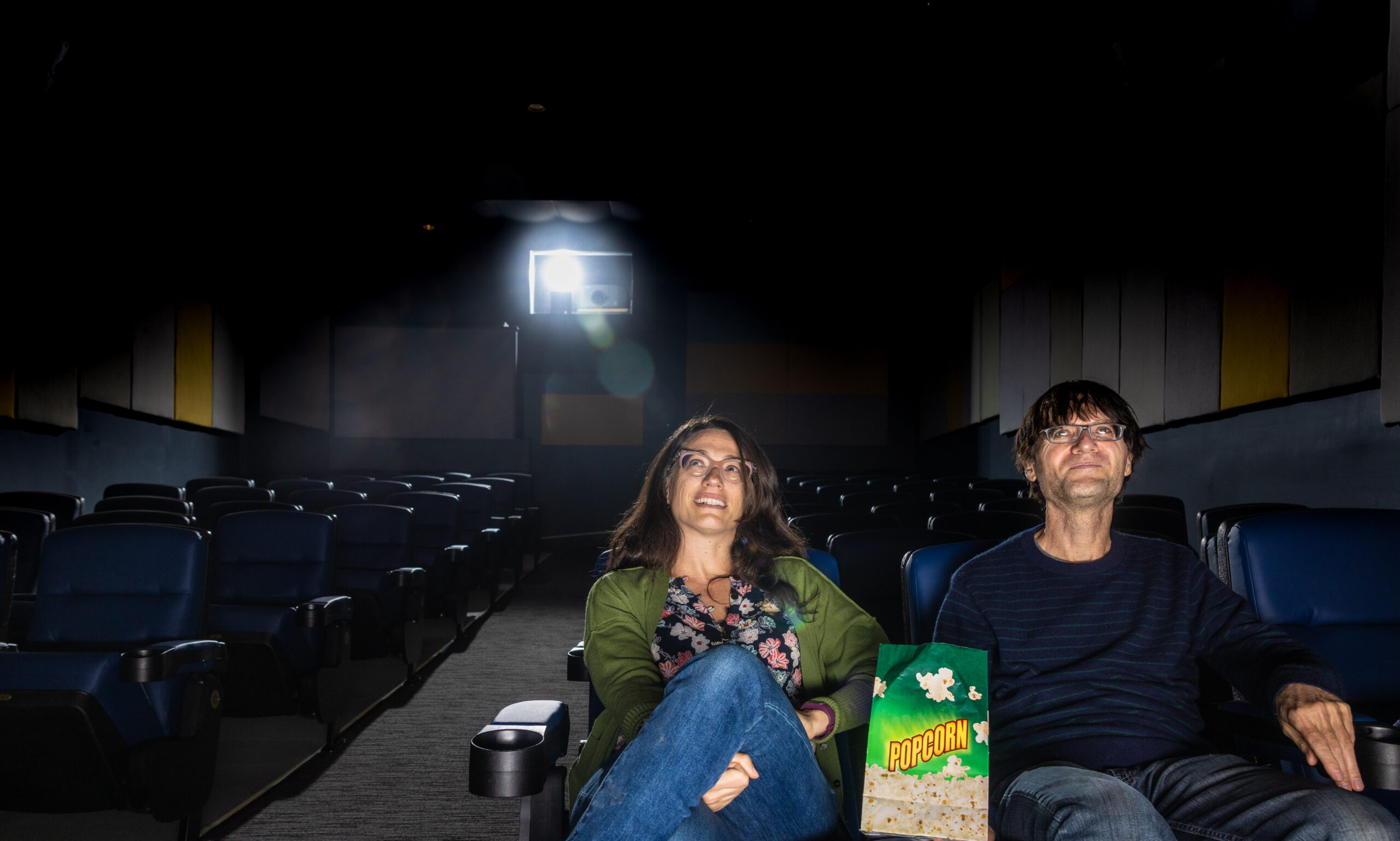 Sabine Gruffat and Bill Brown sit front row at the Chelsea Theater in Chapel Hill. Together the two founded and continue to operate the Cosmic Rays Film Festival, a home for experimental films across the Triangle.

Sabine Gruffat is used to creating her own space in the art world. At 14, she was living in New York and was about to start high school. She enrolled in a painting class as part of the continuing education program at the prestigious Parson School of Design. These were evening classes, and Gruffat was by far the youngest performer in the class. On the first day, students were asked to bring in a painting for the instructor to critique.

“I remember he completely destroyed it,” says Gruffat. “He criticized me in front of the whole class, like everything was wrong with what I was doing. I felt like an idiot at first, but then I remember that it was perfect for me. It didn’t didn’t really upset me. When I showed up for the second class, he was so surprised to see me. He said, ‘I didn’t think you were coming back.’ It made a huge impression on him.”

Twenty years later, it’s that same perseverance that motivated Gruffat to launch the Cosmic Rays Film Festival with her husband and collaborator Bill Brown. When she and Brown first arrived in Chapel Hill in 2011, the lack of local venues for experimental films was frustrating both as artists and as teachers.

“There was a kind of vacuum around experimental cinema when we arrived here,” says Gruffat.

For the past several decades, the Triangle has had a bustling film scene centered around the making of narrative and documentary feature films. Brown talks about the Full Frame Film Festival, a massive three-day international event held in Durham to shine a light on documentary film.

“The Full Frame Film Festival is a really wonderful and quite prestigious documentary film festival,” says Brown. “It’s great, but for our niche – artists’ cinema, experimental cinema and personal cinema – there was nothing at all when we came to Chapel Hill.”

As a professor of digital art in the Department of Art and Art History at UNC-Chapel Hill, Gruffat knew how valuable the festival experience would be for his students. Cosmic Rays was an attempt to create this space locally.

“It’s hard to teach video lessons or animation lessons when students aren’t exposed to the things I teach. They don’t see how it works in the context of the real world. And so, it allows them to see that there is this life beyond school where you can be creative and do work that will be shown.

Also Read :  The metaverse is a naïve joke but the concept of bridging internet and reality is key

Today, the festival shows no signs of slowing down. The most popular screening of last year’s festival was attended by 500 people at the Forest Theater and this year Gruffat and Brown are on track to receive a record number of artist submissions.

Neither Gruffat nor Brown remember an incident that prompted them to put in cosmic rays, but they tell several converging things. They were having their own conversation about trying to collaborate on an exhibition project. At the same time, people recognized that there was an absence of experimental programming.

“It sort of emerged organically,” Brown says. “I think we were excited, but also in the spirit of experimentation.”

The Cosmic Rays film festival launched in 2018. The first year they were screened at the Varsity Theatre, a downtown venue with a rich history for Chapel Hillians.

“We had this great, quaint downtown with a two-screen movie theatre. It was kind of the perfect place,” Brown says.

Since then, it has been a screening venue for all festivals.

Gruffat has also invited a guest curator as part of the Hanes Visiting Artists Program: David Dinnell, the former artistic director of the Ann Arbor Film Festival, the oldest experimental film festival in the country.

Attendance throughout the festival was high and feedback from artists was enthusiastic.

The first Cosmic Rays were a success, and Brown admits they were lucky with their first festival. This success propelled them into the future.

As they grew, Cosmic Rays sought funding to support it. He has twice received the Orange County Arts Commission’s Basic Arts Program and an Artist Project Grant, and he just received his first Spark the Arts grant. Awarded by the North Carolina Arts Council, the grant is designed to encourage live programming around the arts post-pandemic. They partnered with the UNC-Chapel Hill arts initiative, Arts Everywhere, to secure funding.

“I think it’s extremely important for a university to have that connection to something like cosmic rays,” says Kathryn Wagner, associate director of Arts Everywhere. “It encourages students to think about how they are pushing boundaries with their own creations. Art is not made to stay in a box.

Arts Everywhere was also a partner in the National Endowment for the Arts Grant (NEA) grant application process and, for the second year in a row, they were awarded a grant.

“We were excited because it’s really hard to get these grants, and we were kind of nobody,” says Gruffat. “This grant really put us on the map because there are a lot of festivals that don’t receive grants. This next festival is going to be the biggest so far because it’s made more money than we’ve ever had and we’ve learned a lot.

This year’s grant, like the first, is for the month-long digital exhibition Cosmic Rays at the Lump Gallery in Raleigh, which will run concurrently with the film festival. Customers will interact with the art via virtual reality glasses, iPads and other electronic media.

The exhibition is an extension of ideas Gruffat explores in his own research, and Brown believes it shows how fundamental his work is to the idea behind Cosmic Rays.

Gruffat works with communication technologies through video, photography, augmented reality and virtual reality, examining how technology affects how work is received. She describes her work as a mixture of Neil Postman and Marshall McLuhan. Postman wrote the acclaimed cultural critic, “Have fun ’til death” and McLuhan is a well-known communication theorist who coined the phrase, “The medium is the message.”

“The way I think about it is that I don’t have much to say,” admits Gruffat. “But I’m interested in exploring how the discourse has changed because of the internet and social media. I’m interested in the speed at which dialogue occurs and how tribes are formed through these technologies.

Gruffat studied film at the Rhode Island School of Design. She learned computer 3D animation and design programs like Adobe After Effects and Photoshop, but most importantly, she learned these tools at a crucial time in filmmaking when analog was transitioning to digital. When she started school, her cohort was still shooting on 16mm film and analog video, and by the time she graduated they had switched to digital video, often learning new technologies alongside the teacher. .

“I think one of the reasons I’m not tied to any particular technology is that I’ve had experience with so many different technologies and can see how they affect how things look.” 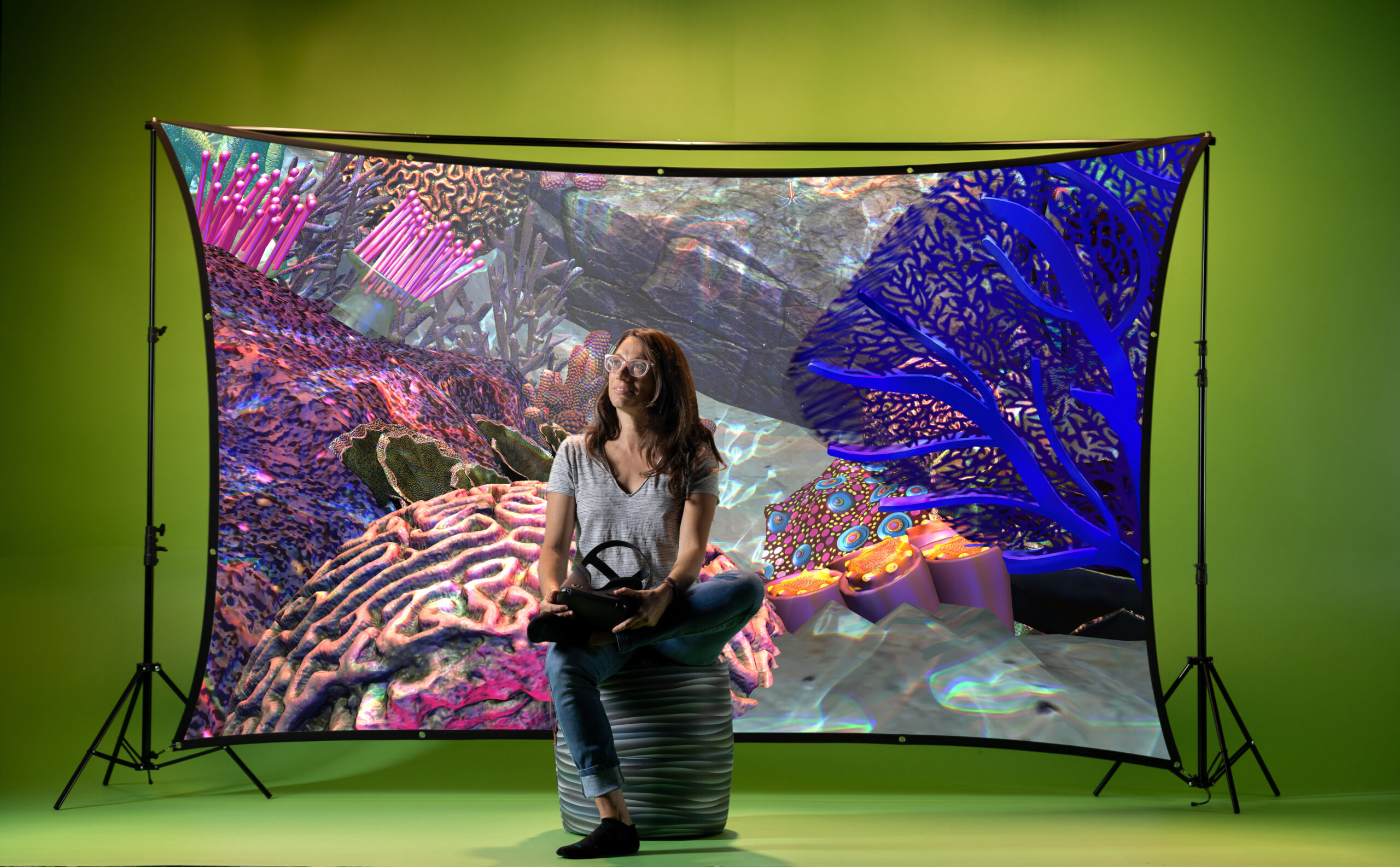 Also Read :  Apple’s AR/VR headset will scan your iris when you put it on

For her most recent project, Gruffat taught herself how to use video game software called Unity. Although it is intended for the design of the “open world” 3D environments common to the medium, Gruffat uses it in collaboration with Brian Naess, GIS analyst at the UNC Institute for the Environment. Naess studies reefs in the Caribbean Sea and uses data to create a 3D version of one of these reefs.

“My role in the project is a combination of scientific advisor and database developer,” says Naess. “As a science advisor, I work with Sabine to think about how to convey the impact of overfishing and warming sea temperatures on coral reefs and their inhabitants. As a database developer, I finds spatial data that ranks the risk of overfishing on reefs around the world.”

This data is updated in real time and viewers, looking through augmented reality glasses, can see the reef changing right before their eyes.

“It’s augmented reality and 3D animation,” says Gruffat, “It changes the digital environment to the actual coral reef. It’s extremely cinematic. It transports you. I build this coral reef around you, and it puts you in this other space.

The additional funding Gruffat has received with the help of Arts Everywhere will help next year’s festival grow, giving Gruffat the opportunity to hire a docent to oversee the Cosmic Rays digital exhibit. Digital art forces customers to interact with technology, and a docent can help guide someone unfamiliar with an iPad or VR headset.

Gruffat and Brown plan to hire someone to market the festival and maintain the website, pay themselves a stipend, and pay the filmmakers.

“The idea is to pay the creators,” says Gruffat. “We try to put the money in their pocket because we think they’re the ones providing the value.”

Gruffat acknowledges that the additional manpower provided by the new funding is essential for the festival to continue to grow. She hopes it can grow to include more filmmakers, more immersive exhibits, and greater use of virtual and augmented reality.

“There was so much momentum that came out of that first year,” Brown shares. “It kind of pushed us along. By launching the festival, it was as if Jacques Cousteau was exploring an underwater abyss. It just clarified what we already had here but didn’t really understand or recognize because we didn’t connect all the dots before that. We built it. And they came.