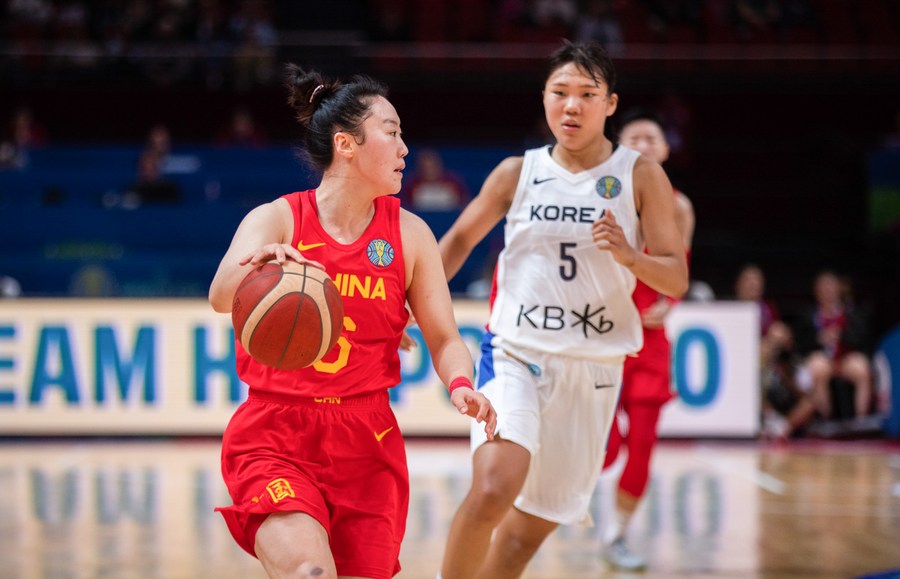 Wu Tongtong (L) of China controls the ball during a Group A match against South Korea at the 2022 Women’s Basketball World Cup in Sydney, Australia, Sept. 22, 2022. (Photo by Hu Jingchen/Xinhua)

SYDNEY, Sept. 22 (Xinhua) — An aggressive Chinese team got off to a flying start as they clinched a stunning 107-44 victory over South Korea in the opener of the FIBA ​​Women’s Basketball World Cup held in Sydney, Australia on Thursday celebrated.

China, brimming with young talent, entered the flagship 12-team women’s tournament in Sydney as one of the favourites. They lived up to those expectations with complete dominance over Asian rivals South Korea to start the 10-day tournament in an intimidating manner.

China played a high-octane style under head coach Zheng Wei and grabbed a double-digit lead early on. They never backed down in the one-sided contest, as their athleticism and size advantage overwhelmed South Korea at both ends throughout the match. 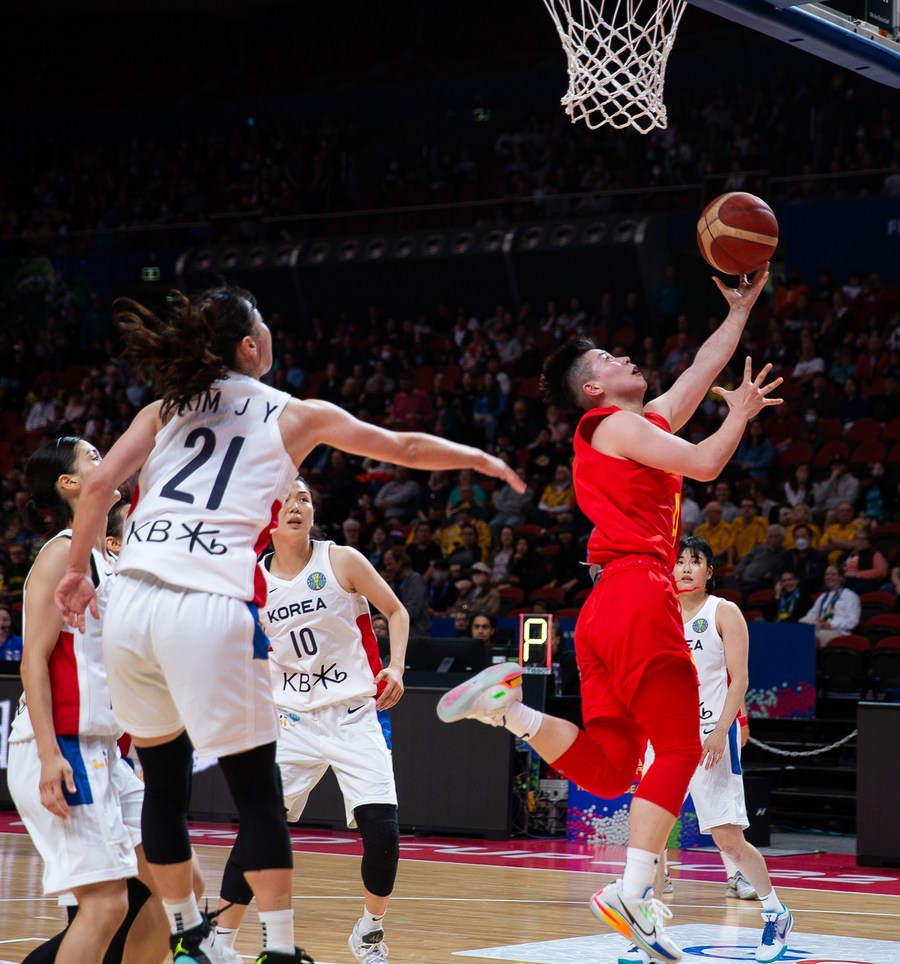 Li Yuan (R) of China hangs up during a Group A match against South Korea at the 2022 Women’s Basketball World Cup in Sydney, Australia, September 22, 2022. (Photo by Hu Jingchen/Xinhua)

Zheng said the team was fully prepared for the opener, which was often difficult to play, and praised her girls for executing the targeted game plan well against a South Korean side who are quick and accurate beyond the arc, to contain the opponents.

Li Meng and Yang Liwei each scored 14 points as 11 players made the scoreboard for China, keeping their opponents off the field with a miserable 23 percent.

“We pushed hard on defense and everyone was tireless in defending the perimeter… We also managed to get some fast breaks. We won the match very well,” said committed center Han Xu, who had a double-double of 13 points and 15 rebounds.

South Korea head coach Jung Sun-min said the team had no alternative for injured WNBA center Park Ji-su, but the World Cup was still a great experience for the young players. 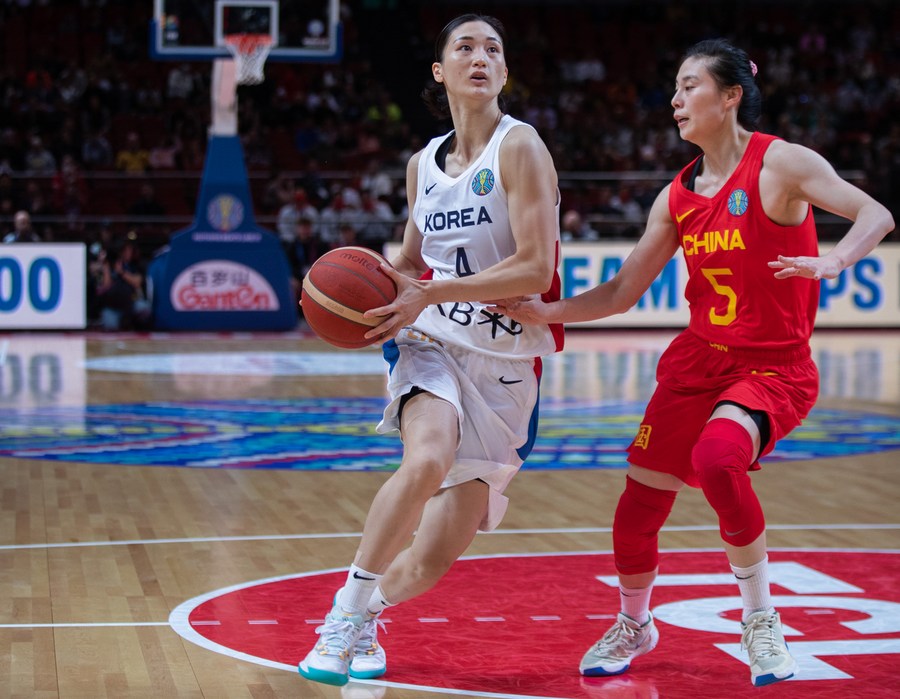 Wang Siyu (R) of China defends Yoon Ye-bin of South Korea during a Group A match at the 2022 Women’s Basketball World Cup in Sydney, Australia, Sept. 22, 2022. (Photo by Hu Jingchen/Xinhua)

It was a nearly flawless performance for China, who will take on Bosnia and Herzegovina on Friday before a far tougher test in a blockbuster Group A against three-time holders the United States on Saturday.

Zheng said the team will make some focused preparations for the game against Bosnia and Herzegovina, which she believes will be very exciting.

China started aggressively and took a 16-2 lead within the first five minutes when sniper Huang Sijing scored an early three. They shared the ball sharply to unleash their offensive weapons.

The overwhelmed South Koreans battled the taller Chinese defenders amid a scoring drought.

But South Korea settled down and snapped the ball around to open shooters but couldn’t close the gap as China held a 27-11 lead after the first quarter.

Also Read :  China delays the release of GDP and other economic data without explanation amid Party Congress

A ruthless China stepped on the gas early in the second quarter, quickly scoring 10 points to extend their lead to a commanding 26 points. The young Chinese team continued to push the pace, with fast guard Wang Siyu completing the transition brilliantly. 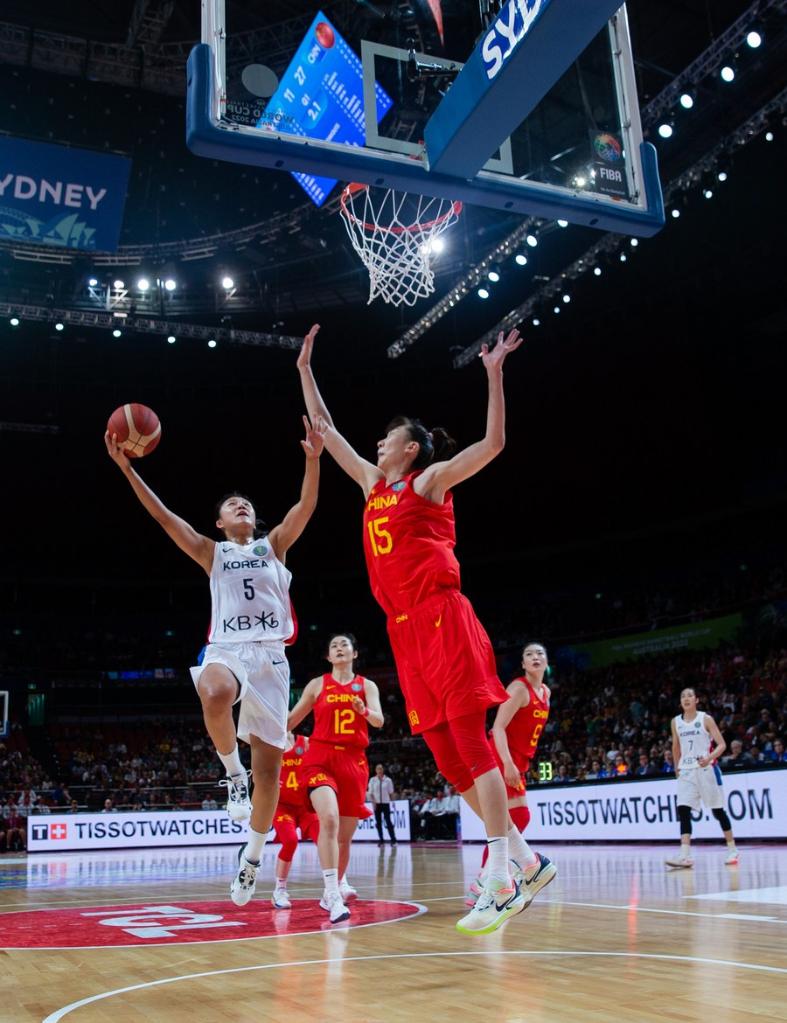 Despite going into the second half with a sizable 34-point lead, China maintained their dominance marked by a stifling defense and their impressive reserves underscored the team’s great talent.

China cooled off in the final quarter, the result was set, but they still shot past triple figures as Li Yuan scored a three in the dying minutes.

China’s best-ever result at a World Cup was a second-place finish in 1994, when the event was last held in Australia.